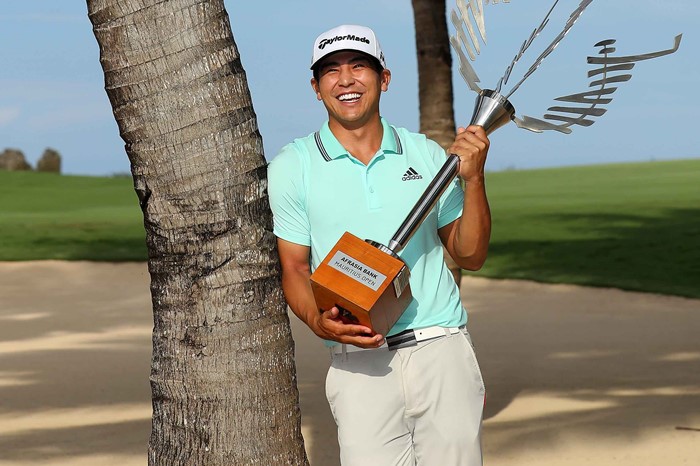 It took American Kurt Kitayama only three tournaments as a European Tour member to turn his rookie season into a winning one as he claimed the AfrAsia Bank Mauritius Open by two shots at the Four Seasons Golf Club Mauritius at Anahita on Sunday.

The man with a smile as bright as a Mauritius sunrise closed with a 68 to win this tri-sanctioned tournament between the European Tour, Sunshine Tour and Asian Tour on 20-under-par.

Kitayama started the final round tied for the lead with Harding. But as Harding struggled to make anything happen on the final day and eventually signed for a 71, Kitayama made two birdies and an eagle in his first five holes for exactly the fast start he needed to set him up for the victory.

“I’m just so proud and really happy. It’s an unbelievable moment for me. I’m just so happy I was able to pull it off,” said Kitayama.

“There were definitely some nerves around the first tee shot and that early stretch of going birdie-eagle-birdie helped to calm things down for the rest of the day.”

Harding made a positive start himself with two birdies in his opening four holes. But he couldn’t recover from back-to-back bogeys at holes six and seven.

“It was my own doing really. But all credit to Kurt. He was really solid out there,” Harding said.

Pavon surged through the field with a 67 that included a run of five birdies in his opening seven holes, and Chikkarangappa S. also signed for a 67 to climb the leaderboard on the final day. Defending champion Dylan Frittelli made a significant move with his 65 to finish on 16 under.

But there was a definite sense that with his quick start, Kitayama had broken the back of any challenge coming his way.

“I was aware a little bit of what was going on and I kept one eye on the scoreboard. I just tried to stay calm and take it one shot at a time,” he said.

After playing for most of the year on the Asian Tour, Kitayama earned his European Tour card by finishing third at the Final Stage of Qualifying School recently. And he’ll take this form to South Africa where he will see out the year playing the South African Open hosted by the City of Joburg and then the Alfred Dunhill Championship at Leopard Creek.

“This whole year has been, well, what a great year. I still have two more events, but to win on one of the last events of the year is just great,” he said.