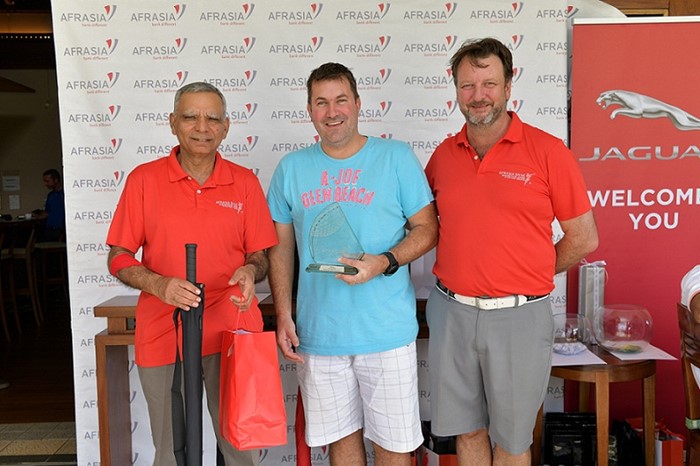 Gary Todd has won his ticket to the AfrAsia Bank Mauritius Pro-Am 2018, after qualifying at the top spot of AfrAsia’s second golf day played last Saturday 21 July at the Heritage Golf Club in Bel Ombre. This event welcomed over 50 golf enthusiasts, who competed in four-ball game, over an action-packed competition, which Gary Todd finally bagged with a score of 40 points ahead of Benoit Lagesse.

Maheer Juddoo and Lawrence Boodhoo finished on the same line with 37 points each. On the other hand, Ismael Bahemia and Hubert de Speville won the 5th and 6th place respectively. In the women category, Arlette Chung won the first spot with a score of 34 points while Sangeeta Juddoo claimed the "nearest to the pin" prize.

‘’First of all, I want to thank everyone who responded to our invitation. This tournament enables us to connect with our clients while offering them a golf day of impeccable quality. Moreover, this competition is an opportunity to come across talented golfers who not only have the capability to grow the game at a professional level but also promote the ‘Mauritius Brand’ on an international platform, ‘’outlined Sanjiv Bhasin, CEO of AfrAsia Bank speaking at the prize giving ceremony.

The winner Gary Todd added that ‘’It is a wonderful day with a great atmosphere and I am delighted to win the competition. I would like to thank AfrAsia Bank for bringing such wonderful event.”

The AfrAsia Bank Mauritius Open (ABMO), to be held from 29th November to 2nd December 2018, is the only worldwide tri-sanctioned tournament endorsed by the Sunshine Tour, the European Tour and the Asian Tour.  No less than 156 international golfer will be competing to win the prestigious prize of EUR 1million. The South African Dylan Fritelli won the last ABMO that was held at the Heritage Golf Club in December 2017. The tournament was broadcasted worldwide and reached more than 350 million viewers. This year's tournament will consist of 48 professionals from each of the three Tours and 12 invitations participating in a 72-hole race championship, which will count for the Individual Order of Merits of the Tours, including the Dubai Race and the Official World Golf Ranking.

View
Photo
Gallery
Focus
Other
Stories
View all
Join the conversation
Subscribe to our newsletter
Get the latest news, straight to your inbox
Disclaimer | Contact
Copyright 2020 AfrAsia Bank Limited