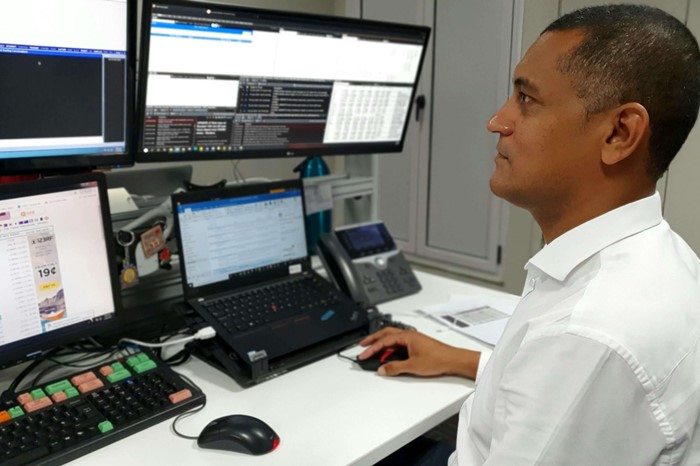 AfrAsia was awarded two distinctions by Elliott Wave International, including the title of Certified Elliott Wave Analyst to Allan Juste, Head of Forex and Derivatives at the Bank. Allan shares his views on this certification as well as this investment tool.

AfrAsia Bank has recently strengthened its expertise in foreign exchange trading. You and your colleague Jolene Li Sing How were recently recognized as Certified Elliott Wave Analysts (CEWA) by Elliott Wave International. What does this international certification imply about AfrAsia Bank's forex trading expertise?

This certification from Elliott Wave International confirms the skills of AfrAsia Bank's treasury department in technical market analysis and risk management on forex and other asset classes, such as the bond market. Certainly, the main idea behind this certification is that beyond macroeconomic analysis, clients, according to their needs, will also benefit from in-depth technical analysis and market forecasts based on the unique characteristics of Elliott Wave theory.

For the record, Elliott's wave theory was established in the 1930s by market analyst Ralph Nelson Elliott. His study of chart curves remains one of the most popular methods used by technical analysts to study financial markets. According to his theory, market cycles were the result of investors' reactions to external factors, or to the predominant psychology of the masses at the time. He discovered that mass psychology always manifests itself in the same repetitive patterns, which then break down into patterns called waves. Even today, thanks to its waves, it is possible to understand when the markets are experiencing moments of strong euphoria and when, on the contrary, they are oriented towards strongly bearish trends, a sign of investors' pessimism.

How does AfrAsia Bank position itself on the foreign exchange market today?

For technical analysis, there is the chart which is the context in which we observe price movements. Note that the choice of the chart by time frame: one year, 1 month, 1 day, 1 hour, 30 minutes, etc., is just as essential in the result of a strategy over time.

However, we remain convinced, in terms of technical analysis, that Elliott's complementary wave theory is an essential element that allows us to better position ourselves in the currency market. For example, Elliott Wave principles can identify a trend (bullish or bearish) in the forex market, determine when a trend changes direction, and indicate whether an upward or downward trend may have ended, thus helping a trader to better manage profits and risk.

For fundamental analysis, we study the economic factors that could influence exchange rates, particularly the decisions of governments and central banks and the evolution of the economic and geopolitical data of influential countries.

The current economic situation and the global uncertainty regarding the Covid-19 pandemic call for the utmost caution and wise management of market risks. What are the parameters to be taken in to account when it comes to operations on the currency market and what are the trends you have observed in recent months?

The whole world has been turned upside down since the first quarter of last year because of the health crisis. Covid-19 is a calamity that no one saw coming, and will continue to have an impact on the financial markets, as the economic consequences are difficult to assess at this stage. Nevertheless, it has also been observed that the largest market in the world, that of currencies, with a record volume of USD 6.59 billion per day, according to the latest triennial report of the Bank for International Settlements, seems to be marked by a certain return of volatility, that is to say that currencies show more sudden and stronger variations in amplitude. It is therefore essential to have an appropriate attitude towards risk management while including simple but well-defined parameters before each investment. In the current economic climate and as a precautionary measure, it is advisable to trade in currencies that are most traded on the forex market with fairly strong liquidity and which give the best trends, such as the euro, the pound sterling, the Australian dollar, the Japanese yen, the Swiss franc and the Canadian dollar. It is especially these different currency pairs that are the most represented: EUR/USD, GBP/USD, AUD/USD, USD/JPY, USD/CHF and USD/CAD.

When preparing to trade in the currency market, it is also advisable to be disciplined and patient, waiting until market conditions are favourable for the strategy you want to apply, as it sometimes takes time to find the right opportunity. Let me also emphasize that it is impossible to trade in foreign currency without risk; because risk is intrinsic to the foreign exchange transaction.

No trading strategy is 100% winning and traders should keep this in mind. In addition, when trading foreign exchange, it is essential to have a functional strategy and proper parameters to better manage your gains and risks of loss. And finally, it is important for a trader to set the amount he is willing to lose (stop loss) according to the degree of risk.

We know that Elliott Wave International makes an analysis of all major world markets (stocks, currencies, bonds, energy, metals, raw materials). Within your investment team, what trading tools do you use to empirically analyse the markets?

Elliott Wave theory and macroeconomic analysis remain the main tools for our treasury analysts. We also use analytical tools like MACD and RSI indicators, which are among the most widely used trading tools in our trading room.

MACD stands for Moving Average Convergence Divergence. This technical analysis instrument was developed by Gerald Appel in the 1970s and provides significant buy and sell signals for our trading choices. The RSI stands for Relative Strength Index and reflects the relative strength of upward movements compared to downward movements. It was originally developed by J. Welles Wilder in 1978. The RSI is a technical indicator used by traders to gauge the strength of a trend and to spot signs of a trend ending. Thus, when the Elliott Wave is coupled with other trading techniques and economic data which act as a catalyst for entry into currency positions, it creates a high probability of success for trading strategies and risk management on the trading floor.

Despite a recovery since mid-November, financial markets remain very volatile. Against this backdrop of crisis, how have you reviewed your trading strategy?

Our forex trading strategy has remained accommodating to market conditions since the timid recovery in the previous months. However, opportunities continue to be found on the same basis of in-depth technical analysis and treasury parameters. Compared to the local market, foreign exchange trading against the Mauritian rupee has found takers among local importers and some individuals, despite a slowdown in economic activities due to restrictions related to the Covid-19 health crisis. However, the volatility of the rupee against the reference currencies has become less tangible since March 2020 following successive interventions by the Bank of Mauritius on the local foreign exchange market to offset the lack of liquidity. Additionally, on the bond market, the team is relying more on fundamental analysis and remains cautious in anticipation of the rise in interest rates by investing mainly in the short term.

Vaccination campaigns against Covid-19 are going well around the world. This should accelerate the recovery. Moreover, the United States is expecting a recovery of the economy around the month of June. As the performance of the financial markets is dependent on the economy, should we expect an upturn in the second half of the year?

The performance of the financial markets remains a leading indicator of the economy, the result of analyses by various participants in the financial world. The S&P 500 reached its highest level less than two weeks ago, and U.S. Treasury bills have posted an increase in yield, a sign that participants expect less support from the U.S. Federal Bank. This optimism, initially caused by the immunization campaign, is heightened by the measures expected with the election of Joe Biden as President of the United States, including a stimulus package worth USD 1.9 trillion. Therefore, investors expect not only that the U.S. economy will improve, but also that more funds will be directed to the financial markets.

However, U.S. authorities expect the new strain of the virus to hit the United States hard in March of this year, when almost half of the 22 million Americans who have lost their jobs since March 2020 are still unemployed. Moreover, if Joe Biden fails to implement the announced measures, the disappointment will be quickly felt in the financial markets in the second half of 2021. In any case, we do not expect to see again the extreme volatility we saw during the peak of the virus last year with the support of the U.S. State and Federal Bank.