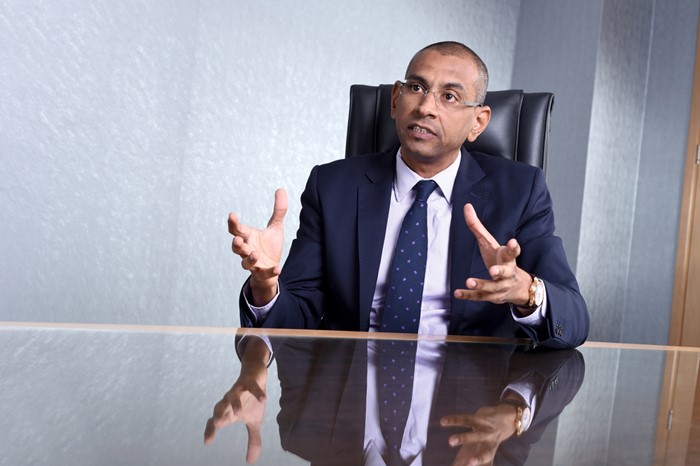 Mauritius remains the best gateway for cross-border investments into Africa.

Mauritius remains the best gateway for cross-border investments into Africa Where else will the clients go?

Yogesh Gokool, Senior Executive – Head Global Business at AfrAsia Bank, tells Investor’s Mag that the future of the Mauritius International Financial Centre (IFC) lies “in us moving from a treaty-based jurisdiction to a mid-shore jurisdiction of substance,” focusing on “value-added services while continuing to do what we are already good at.” Yogesh Gokool has over 25 years of experience in financial management gained whilst working for International Financial Services Limited (now part of Sanne Group Plc), a leading International Management Company in Mauritius. Yogesh also worked for Deutsche Bank (Mauritius) where he headed the fiduciary services division. He sits on the board of STEP Mauritius, which promotes Private Clients work.

How is the Global Business sector in Mauritius developing, and how important is it to the Mauritius economy, particularly the banking segment?

The Mauritius International Financial Centre (IFC)is serviced by 21,000 Global Business companies & nearly 1,000 global investment funds. It is estimated that the total assets of Global Business companies are USD717 Bn. The contribution of the financial and insurance activities to the GDP for the past three years averaged 12%, within which the Global Business contributes 6%. The financial services sector has been registering a constant growth in terms of direct employment throughout the past years. The total direct employment reached 15,000, representing year-on-year growth of 5%.

It is also essential to factor in indirect employment, including but not limited to the following professions: real estate, accountancy, legal, hospitality, tourism, and skilled workers. For instance, in respect of the big four accounting firms and the large legal firms in Mauritius, most of their fees are derived from the Global Business and financial services sector.

So the sector contributes directly and indirectly to roughly 15% of the GDP and employs an aggregate 20,000 people. The financial services sector raises USD180m in taxes annually.

Intricately linked with the financial services sector is the banking sector. The Global Business Companies’ deposits accounted for around 34% of banking sector assets (USD35 Bn) as of June 2019 (68% of our GDP).

Over the past 30 years, the Mauritius IFC has evolved from a treaty-based jurisdiction to a jurisdiction of substance. International investors set up in Mauritius today not only because of Double Taxation Agreements (DTAs) and fiscal advantages but also because the country has a sophisticated banking, financial, and legal infrastructure combined with specialised staff, market expertise, ease of doing business, and proximity to rapidly expanding in Africa.

How would you resume Mauritius’ unique selling point as an IFC?

The robust legal environment, the absence of foreign exchange controls, the educated, and bilingual workforce have helped propel the Global Business sector to a prominent contributor to Mauritius GDP. The list doesn’t stop there – the membership to various regional trade agreements (COMESA, SADC), the ease of setting up and doing business, the good corporate governance, the double taxation agreements, the investment promotion and protection agreements. The country has all the ingredients to make it the IFC of choice and the preferred gateway for investments into (and out of) Africa and Asia (mainly India).

For me, Mauritius’ USP as an IFC is its people. We have a skilled workforce at a relatively low price (accountants, fund administrators, lawyers, and bankers) to deal with modern international clients’ exigencies. We are also bilingual (English and French), breaking all communication barriers. The level of service is high – hard-working culture, fast and efficient.

It is the people combined with the right breadth and depth of products, which have helped develop a conducive ecosystem for promoting cross-border investments and solutions to High Net Worth Individuals in respect of their private wealth.

The EU has blacklisted Mauritius’ IFC, what impact will this have on the jurisdiction?

Mauritius cannot afford to remain on the EU’s blacklist because there could be severe ramifications for the country in general but more specifically for the financial services and banking sectors. These can be categorised into three types of risks:

First, the reputational risk. The potential damage caused by the listing will most certainly jeopardize public confidence in the Mauritian jurisdiction. This is likely to hamper the vision of Mauritius as an IFC and the confidence of international investors.

In addition to European countries, other countries may also immediately or progressively become suspicious of Mauritius’ genuine payments, thereby undermining the excellent reputation of the financial centre and its broader strategy as an IFC.

Before this issue, Mauritius has never been blacklisted by any international organisation. The listing of Mauritius will inevitably adversely impact the ease of doing business and the competitiveness of the jurisdiction. Mauritius has earned continuously first place amongst African countries in the World Bank’s Ease of Doing Business Index, with the World Economic Forum’s 2017-18 Global Competitiveness Report re-affirming Mauritius as the most competitive Sub-Saharan Country. Mauritius maintained its first position in the Mo Ibrahim Africa Governance Index 2018 with a score of 80/100.

Second is the business risk. Based upon the decision of the European Investment Bank (EIB) not to invest here, other Development Financial Institutions (DFIs) might also be unwilling to invest here. The pulling out of DFIs and sovereign funds from the jurisdiction will severely impact on foreign currency deposits. This could lead to a considerable direct decrease in business for management companies, law firms, accountancy firms, and banks and a reduction in banks’ asset base (34% of banking assets comprise Global Business assets).

There are certain banks, which focus exclusively on the Global Business market industry. This may well cause international banks to leave the jurisdiction, which could be a considerable setback when trying to attract international players.

It may also result in a loss of jobs and a decrease in purchasing power due to less employment creation and has a contagion effect on all sectors like hospitality, tourism, retail, automobiles, and IT amongst others.

EU nationals will be reluctant to invest in Mauritius and therefore affect the real estate sector. In 2019, property sales to EU nationals amounted to approximately MUR10 Bn.

Third, is the operational risk. Bank payments from/ to the EU would be subject to Enhanced Due Diligence (EDD). EU banks and professionals will be obliged to scrutinise all business transactions involving local operators and apply EDD measures. EDD means longer timelines towards completion, more frequent risk assessment reviews of the relationships, and higher compliance costs.

At a broader level, the relationship with correspondent banks could be adversely impacted. Payments for imports could be subject to queries or may be rejected by foreign banks and could cause a shortage of supplies for given products.

It is not the first time the financial reputation of Mauritius is at stake on the international scene. Why according to you?

It’s good to understand how Mauritius started as an IFC. In the early days, international investors used Mauritius mainly for fiscal benefits by leveraging on the network of DTAs signed by the country.

Initially, Mauritius was being used for fiscal benefits mainly as a treaty-based jurisdiction, but we have evolved as an IFC, and now international investors come to Mauritius not only to optimise their taxation but also because of other advantages the country offers in terms of cross- border investment, which I have enumerated earlier.

Foreign investors come to Mauritius because of all these ingredients. Mauritius is a financial centre where they feel safe for their investment.

Are the regulatory demands being made on Mauritius IFCs excessive compared to other ‘mainstream’ financial centres?

The regulatory framework that is being requested on IFCs is more or less the same for example, FATCA, CRS, BEPS, declaration of beneficial ownership amongst others. Given that the techniques of money laundering are changing, the requirements to fight those are also evolving. Having said this, it must be highlighted that Mauritius has not been on the EU blacklist ever. Today, we find ourselves on this list just because the EU has changed the methodology that they use to assess the countries, and they now use the FATF list as a base.

I think this is very unfair because the EU has got only two lists – white and black. While the FATF has got three lists – white, grey, and black. Mauritius finds itself in the FATF light grey list, meaning it has already identified all its deficiencies and has already committed and is working swiftly to address same. However, despite this, we find ourselves in the EU blacklist.

It’s even more unfair because the new methodology of assessing the third countries was released at the same time the blacklist was issued.

What does the future hold for Mauritius as an IFC?

If Mauritius continues to be on the EU blacklist, it will be problematic for us as new businesses will be severely affected. There will be a contraction of the Global Business sector and a negative impact on the economy, including unemployment.

Mauritius remains the best gateway/ hub for cross border investments and trading into/ with Africa. Where else will the clients go? Our future lies not only in continuing to do what we are already good at, and here I am referring to corporate administration and accounting but also moving from a treaty-based jurisdiction to a mid-shore jurisdiction of substance, that is, the focus should be on value-added services such as :
• Fund/ capital raising & investment banking
• M&A/ Advisory services
• Family office services
• Protection of assets

Tell us about the financial strength of AfrAsia Bank with regards to the global challenges?

The good thing with AfrAsia Bank is that we remain a very stable, liquid, and well capitalised financial institution. AfrAsia has a loan to deposit ratio of approximately 24%, a liquidity coverage ratio of more than 600% on the Rupee, and more than 250% on foreign currency, coupled with a capital adequacy ratio averaging 15 to 16%. We remain one of the safest banks in Mauritius and maybe in the whole African Continent.