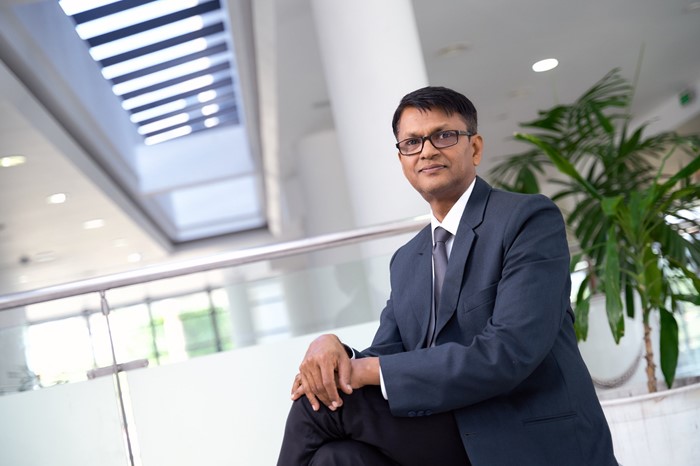 “Brexit and coronavirus will necessarily have an impact on major currencies”

Afrasia’s Head of Treasury Jen Ramanah explains the mechanism of excess liquidity and how it can harm financial stability if it keeps growing. He underlines that managing liquidity surplus is an exercise requiring econometric skills and robust experience in monetary, financial and economic analyses. The market is not expecting an increase in the Repo Rate, opines Jen Ramanah regarding the forthcoming MPC meeting.

When we refer to excess liquidity, it means simply that the level of liquidity has exceeded a threshold. When can we reasonably affirm that a country is facing a liquidity situation?

In simple terms, excess liquidity in an economy is a situation where there is more money in the banking system as a whole than is strictly needed. Banks hold clients’ deposits which they use to acquire assets (mostly loans and advances). Banks also need short term liquidity to meet clients’ immediate liquidity needs and are also required to hold minimum statutory reserves with the Central Bank, known as Cash Reserve Ratio.

All liquidity available in the banking system that exceeds the needs of banks is called excess liquidity. In the jargon of the economist, excess liquidity will be defined as a situation where money supply is growing at a quicker pace than the economy. In other words, there is, as Economist Coulbourn has put it, “too much money chasing too few goods”, hence, a potentially inflationary situation. Questions that arise in situations of excess liquidity are: What can banks do with it? Is it just idly lying around doing nothing for the economy and for citizens? What can Central Banks do about it? Whose responsibility is it to handle the phenomena?

To what extent can liquidity excess impact negatively on the financial stability of a country and why should Central banks mop up this excess?

If the surplus of liquidity keeps growing over an unusually long period of time (economists will sometimes call that monetary overhang), it is a cause of monetary policy concern for the Central Bank. Such a situation is normally inflationary and the Central Bank needs to have recourse to Open Market Operations (OMO) and issue securities to mop up the surplus.

Is it normal that the Bank of Mauritius alone is involved in this exercise given the fact that managing surplus of liquidity is financially costly? You will recall in the past that the BoM’s ex-Governors have insisted that the Central Bank and the MoF share the cost of this monetary policy, as it can negatively impact on its financial results.

Every economy would have its own specificities, weaknesses, and strengths and capacity to counteract headwinds. It would not be unreasonable to assume that a Central Bank would have a pool of seasoned economists and econometrists to do the exercise.

In my opinion, it should be the entity vested with the authority of monetary policy management (hence the BoM in Mauritius) which should have the responsibility to mop up excess liquidity. Of course Monetary Policy management does have a cost and it is a known fact that OMO as a rule does impact on the Profit and Loss account of Central Banks. I believe that containing the excess liquidity by appropriate monetary measures will in the long term be less costly to the economy as a whole, than allowing a situation of money overhang for a protracted period of time.

The BoM’s latest report mentions an amount of 3.5 billion rupees to mop up excess liquidity. Is the situation so alarming that it requires so much money for this monetary operation?

Indeed the Central Bank states in its annual report for the year ended June 2019 that mopping up the excess liquidity from the monetary system has been very costly to the tune of Rs 3.5 billion, representing an increase of 45.8 percent over 2017-18.

However it must also be noted that the average excess MUR liquidity in 2018-2019 was by 52 per cent above the level of 2017-2018. I believe the BOM is assuming fully its function of monetary policy regulator. As the government has been reducing its issue of Treasury Bills, the BoM has had, rightly, to step in and issue BOM securities to mop up the liquidity. As I said earlier, monetary policy has a cost and in my humble opinion the cost of the OMO is justified.

We have noted for some time lots of interest on the part of certain individual investors and financial institutions for Treasury Bills and other securities. Demands for T-Bills are generally over - subscribed. How do you analyse this situation?

However, it is true to say that there has been lately a substantial increase in the demand for those Government papers from corporates and the general public at large. We must admit that the level of sophistication and knowledge from investors, coupled with the efforts of Primary Dealers to educate further the investors, have contributed to develop the secondary market in Government Securities.

The advent of Brexit together with the economic impact of coronavirus will certainly cause the financial market to be highly volatile thus weakening the exchange rates of international currencies. How do you assess this situation?

Surely, those two events will necessarily have an effect on major currencies given the globalisation of the world economy. And this given the current importance of China in world trade and its raw materials intensive economic model. The coronavirus virus will definitely have negative consequences on the economic activity and the purchasing power of many countries.

Regarding the United Kingdom, the 5th major economic power globally, it also has commercial and financial ties with many countries. If Brexit causes a deterioration of the UK economy and the pound sterling, this will surely bring about a weakening of global GDP and foreign exchange in some countries.

The Bank of Mauritius has recently confirmed the transfer of Rs 18 billion from BoM Special Reserve Fund to the Finance ministry. The purpose being to partly refund the government public debts before June 2021. As Head of Treasury, don’t you think that this decision is poised to jeopardize the independence of the BoM?

This issue has been largely debated in the press and in other forums, including the National Assembly. I will prefer to avoid commenting further on this. Honestly, I don’t think it appropriate for me to comment on the independence of the BoM. What I can say, though, is that the BoM operates within the stipulations of the Bank of Mauritius Act and under the steering of its Board of Directors. The financial accounts of the BoM is also independently audited.

The next Monetary Policy Committee meeting is scheduled on 26th February next. Do you think the MPC members will decide to keep the Repo Rate unchanged or do you feel the BoM can still bring down the rate thus impacting negatively on the already low-saving rate?

All will depend on the MPC members’ views on the Mauritian economy and their forecast of growth and inflation rates. However, the local market is not expecting any hike in the Repo Rate, and with the downward trend in interest rates globally, the logical tendency would be either a fall or at best maintaining the status quo may be.