"It is not the strongest or the most intelligent who will survive but those who can best manage change."

After rising relentlessly from the first week of April, the Single currency fell sharply from a two-week highs of $1.0990 to $1.0854 on Wednesday undermined by disappointment in markets over a half-trillion-euro coronavirus rescue plan agreed by euro zone finance ministers late last week coupled with dismissal U.S retail and Factory data which sparked flight to the safety of the greenback.

Indeed, after two-day stressing discussions, last week, EU finance ministers finally agreed on a €540 billion stimulus relief package via the European Stability Mechanism, meant to support member stated. Basically, cheap loans through the so-called “corona bonds” to governments, allowing them to subsidize wages so that companies can cut working hours rather than jobs, and a plan for the European Investment Bank to step up lending to companies.

Now, the epicenter of the debate in the European markets, post Easter holidays, appear to have shifted away from the developments of the coronavirus to the hard recovery that many economies will face once the COVID-19 crisis is over. In this regard, on Tuesday 14th of April, the International Monetary Fund (IMF) in its world economic outlook projected the global GDP to contract around 3% this year and forecasted that the world may see the deepest recession, since the Great Depression in the early 1930s that lasted until about 1939.

On the hourly Chart below, the overall wave pattern on EUR/USD during 6th and 15th April 2020 adheres to the shape of an Ending Diagonal pattern. An Ending diagonal is a special type of Elliott Wave pattern which usually indicates exhaustion of the larger movement when markets players have been too far too fast on a currency pair. This pattern is rare in markets and it usually takes the form of a rising wedge in two converging trend line and is followed by a swift and sharp reversal, retracing at least back to the level where the diagonal began and possibly further. Researchers indicate that the move back to where the diagonal began takes about one-third to one and half of the time it took for the diagonal to unfold and it usually makes a zig-zag retracement of 78.6% from the previous impulse.

Here is a close-up view of this Diagonal on an hourly chart, the EUR/USD has pierced the 2-4 trend line and previous wave 4 of a lesser degree at $1.0890, suggesting that the termination point on the Diagonal was stuck at $1.0990 and further downward pressure could be on the cards for the battered euro. 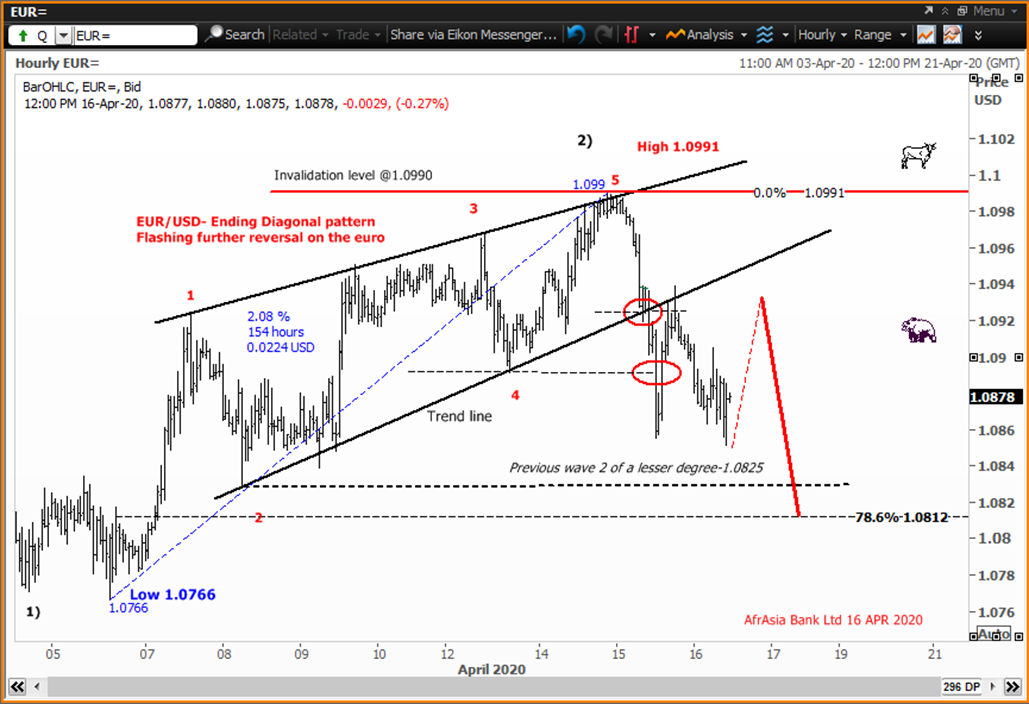 On the downside, the current weakness can see the Fiber continuing on its downward trajectory with bears setting their eyes on the previous wave 2 of the Diagonal pattern at $1.0827 followed by 78.6% retracement at $1.0821. A break through previous low of $1.0766 would open the door for further decline near $1.0377.

Previous article View archives Next article
Become a client
Need any help?Consult our FAQ
Or contact us on+230 208 5500 or afrasia@afrasiabank.com
Get the latest news, straight to your inbox
Subscribe by WhatsApp
Add +230 5255 2671 to your contacts and send "Register Me" to us by WhatsApp message
Join the conversation
Rates & Fees
View all rates and fees
Application Forms
REGULATORY BODY GUIDELINES
View all regulatory body guidelines
Our Shareholders
Swift Code AFBLMUMU
AfrAsia Bank Limited is licensed and regulated by the Bank of Mauritius.