I'm not better than the next trader, just quicker at admitting my mistakes and moving on to the next opportunity.

George Soros
Indicative Selling Rates against MUR
USD
The U.S dollar bolstered to a four-and-a-half-year high versus the Yen on increased expectations of a Fed rate hike.
Fundamental News

EUR/USD
The euro skidded above a 16-month trough at $1.1224 to $1.1243, supported by stronger-than-expected European business surveys. Fresh clues will be hinted at tonight's FOMC minutes.

GBP/USD
Sterling held above an 11-month low of $1.3344 on Tuesday after BoE’s Haskel and Bailey reiterated possible rate hikes and not a hard form of forward guidance, respectively.

USD/JPY
The Japanese yen tumbled to a four-and-a-half-year low of 115.23 per dollar as the risk sentiment remained sour amid increased anxiety over the Fed’s rate hike outlook.

USD/CAD
The Canadian dollar mounted to 1.2690 against the dollar, as crude and Brent oil prices gained after President Joe Biden announced his administration’s plans to tap into the Strategic Petroleum Reserve.

The risk-sensitive Australian dollar crashed to a seven-week low of $0.7205 after the Reserve Bank of Australia announced that interest rates on this side of the ditch will not likely rise until 2024.

USD/ZAR
The South African rand hovered near 15.85 per dollar, shrugging off the leading South African business cycle indicator dipped in September, mainly due to a drop in prices of export commodities and fewer residential building plans were approved.

USD/MUR
The dollar-rupee inched up by 5 cents this morning to 43.50(selling) on the domestic market. 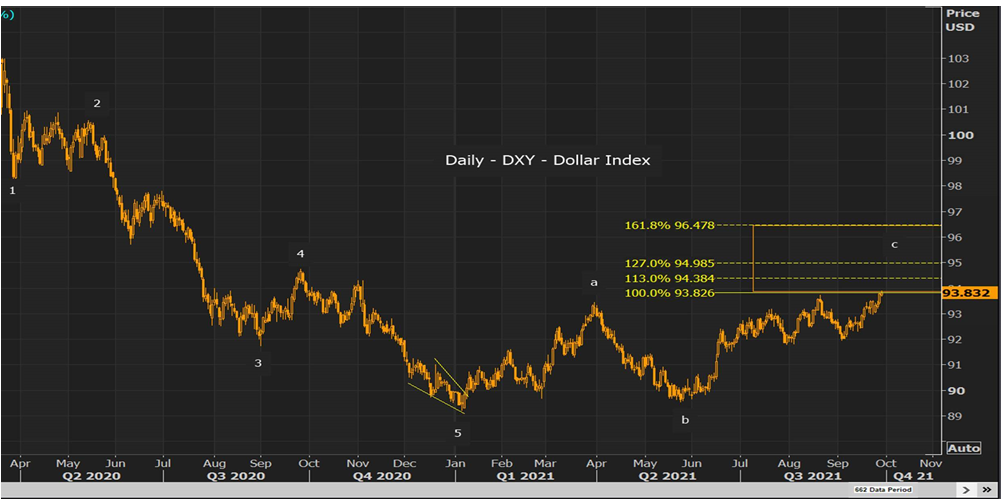 The dollar Index extends its intense rebound near the 94.00 threshold, clinching a new high for this year 2021 amid an earlier rate hike expectation and announcement of a nearing tapering asset purchase which clearly impacted the yield curves.

A tightening of monetary policy by the European Central Bank remains far in the future but ECB remains vigilant on its inflation figures yet to be released this Friday. This could give additional upward momentum on the USD in the near term and exerts additional selling pressure on the euro and the pound.

1.3750 marked the completion of ‘wave e’ of the triangular retracement (wave B) of corrective move A-B-C  for GBPUSD and abruptly, we saw fresh sellers entering the market below the 1.3600 levels yesterday.

As per Elliott wave principle, GBPUSD is battling around 1.3515 levels and higher inflation, Brexit and Petroleum concerns could exert further pressure on the pound towards 1.32 levels towards completion of wave C.

A breach and close above 1.3750 nullify this downward pattern.

Previous View Market Patrol Archives Next
Weekly update by Jolene Li Sing How on Radio one
Listen
Speak to our team
Disclaimer
Please note that the information published is purely indicative. It is based on technical data from sources which the Bank verily believes to be authentic, though its timeliness or accuracy cannot be warranted or guaranteed. AfrAsia Bank Ltd issues no invitation to anyone to rely on this bulletin and neither we nor our information providers shall be in no way whatsoever, liable for any errors or inaccuracies, regardless of cause, or the lack of timeliness, or for any delay or interruption in the transmission thereof to the user. The indicative rates and other market information are subject to changes at the Bank's discretion. Whilst every effort is made to ensure the information is accurate, you should confirm the latest situation with the Bank prior to making any decisions.
Become a client
Need any help?Consult our FAQ
Or contact us on+230 208 5500 or afrasia@afrasiabank.com
Get the latest news, straight to your inbox
Subscribe to our newsletter
Join the conversation