A 'falling knife' is a colloquial term often used in the financial market and usually refers to a market's price action, which falls straight down in a dangerous manner. The downward momentum on the price is so strong that it cannot be a one-man show, especially in a liquid market like the euro on the FX market.

On Wednesday, the downtrodden euro plumbed to its lowest level, since early July 2020, at $1.1186 against a roaring U.S dollar on cloudy recovery prospects in the Eurozone. The Forex market has been attributing the free-fall on the euro to a plethora of 'déjà Vu' themes, namely;

Technical outlook- EUR/USD slipped more than 9% this year. Is it time to catch the falling knife?

In early January 2021, on the Daily EUR/USD Chart, it was clear that the impulsive rally from the March 2020 low to the January 2021 high in the EUR/USD pair was a five-wave move to the upside (see figure 1.1). Besides, the rally on the euro was followed by an abrupt reversal to the downside until April 2021. Based on an Elliott wave perspective, knowing that price usually traces five waves in the direction of the trend and then corrects in three waves against the trending, it was apparent that the euro was destined for at least a three-wave corrective setback. 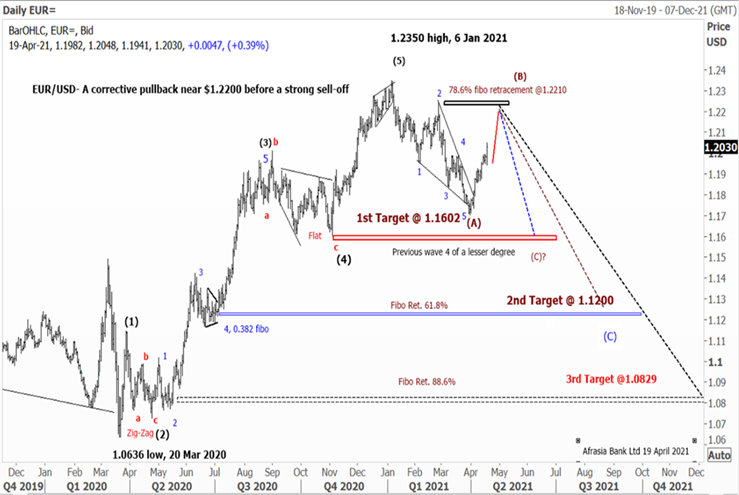 Two months later, we provided the following technical analysis on Friday the 11th of June 2021. 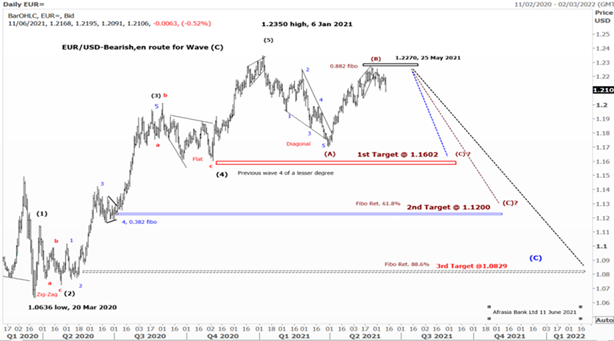 On the downside, the EUR/USD may still fall further to target 3 at $1.0829(88.6% Fibonacci retracement of the rally last year) as highlighted in figure 1.3 above).

The use of the Elliott Wave Principle in technical analysis is another method that could help you stack the odds in your favour, well before the news!!