Our predecessors overcame many troubles and much suffering, but each time got back up stronger than before. – Shinzo Abe

The USD/JPY, commonly known as the ninja, tumbled from 106.93 to 105.20 (-173 pips), following the shocking resignation of the Japanese Prime Minister Abe due to health complications last Friday. Ever since, the pair has recovered to 106.20, buoyed by Tuesday’s cheerful US manufacturing sector data which accelerated to the highest level since November 2018, while shrugging off US ADP data yesterday that revealed a missed estimate on private sector employment in August.

Japan’s election vote for a new Prime Minister next September 14th will likely mean continuation of the status quo for the ‘Abenomics’ stimulus plan designed to weaken the yen through government spending and structural reforms. As of print, Chief Cabinet Secretary Suga, as Abe's key lieutenant and the government's top spokesman, is next in line for delivering promises unfulfilled in a post- Covid economy. On that basis, the Japanese Yen could be at risk of extending losses as the upbeat market mood tends to undermine the risk-on mood of safe-haven Japanese yen, and sponsor the export-driven sector.

The Federal Reserve's new policy framework last week fuelled speculations that U.S rates would stay lower for longer, which may crimp appetite to place aggressive bets and consequently cap gains in the wait of a revival of the US economy. The key focus will remain on Friday's release of the closely watched US monthly jobs report, aka Non-Farm Payrolls.

Conversely, the dexterous US dollar selling seen the last 6 months seems gradually fading ahead of the Federal Reserve’s monetary policy meeting on September 16th, as focus shifts to the prolonged Congressional impasse preventing the provision of much needed fiscal stimulus. House Speaker Pelosi and Treasury Secretary Mnuchin’s phone call on Tuesday appeared to highlight significant polarity about the challenges facing America’s working families. Stimulus deadlock could trigger a resurgence of the risk aversion and in turn may underpin the greenback.

On the daily chart, bulls have far remained very responsive for the dollar-yen since March 9th. However, a sizable pullback from 111.71 of March 20 highs to 104.17 of July 31st in Wave ((2)) has been unfolded into the mix, representing a 61.8% Fibonacci retracement of Wave ((1)). Price could shoot back up to a new high to the locality of 114.58 to 114.71, dwarfing into a rallying wave ((3)) as per Elliott Wave lexicon. Deeper retracement of Wave ((1)) is still on the table, with support at 101.16 of March 9th lift-off. Validating long-term bullish cues probably requires the pair to establish a firm foothold above resistance 111.71. 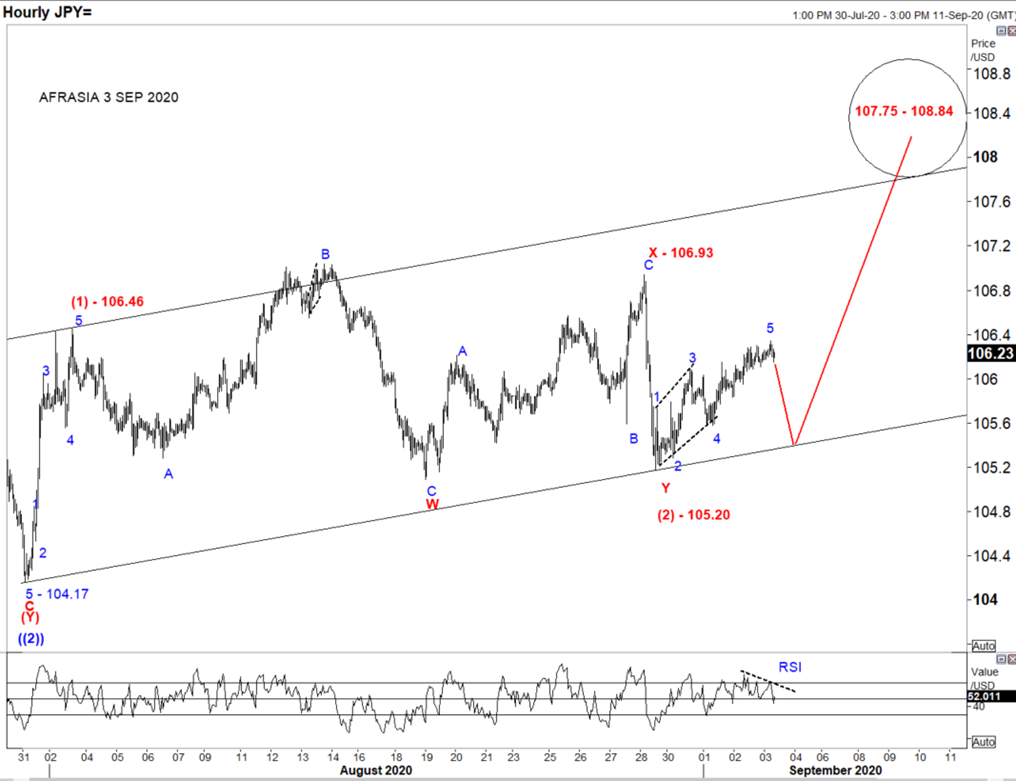 On the hourly graph, after rallying in an actionary wave (1) from 104.17 of July 31st to 106.46, USD/JPY traded lackadaisically in a sideways corrective structure, more precisely referred to a double-three combination pattern W-X-Y as per Elliott Wave analysis. The pair appeared to end the sideways price action at 105.20 of August 28th. In the coming session, USD/JPY may first retreat to 105.38, skirting the base parallel trend line, vetoed by the divergence on the Relative Strength Index (RSI). A rise from the free-market lift off to the peak of 107.75 - 108.84 could be forewarn. On the flipside, failing to navigate above 106.93 may signal resumption of bearish momentum while a jettison below 104.17 would render the bullish Elliott wave count obsolete.

Download
Previous article View archives Next article
Become a client
Need any help?Consult our FAQ
Or contact us on+230 208 5500 or afrasia@afrasiabank.com
Get the latest news, straight to your inbox
Join the conversation