GBP/USD struggles into an extended sideways price action, at risk of falling further!

“When you have eliminated the impossible, whatever remains, however improbable, must be the truth: - Sherlock Holmes.

The Pound turned sour from a high of $1.2665 last night as risky currencies were sold-off into the growing fears of an upcoming second wave of the coronavirus pandemic, after California’s Governor Newsom scaled back on the state’s reopening and imposed stiff new restrictions on many businesses and public spaces amid a surge in COVID-19 cases.

This morning the British Pound was struggling to retain any meaningful traction to finally plunge to current $1.2520 price zone, following the release of weak UK GDP growth in May. However many uncertainties in the United Kingdom continues to undermine UK economic outlook;

- The lack of progress in Brexit talks toward a trade deal with the EU, adding to the risk of a no-deal Brexit event
- Chatter on possible negative rates in the UK
- Bank of England Governor Bailey was on the wires on Monday, saying that he thought that Britain’s economy was starting to recover but had a long way to go, with the outlook for jobs a particular worry.

However, In an Elliott wave perspective, the surge on the Pound lately, appear to be a 3- waves price movement, suggesting a corrective price structure with more downfall to follow.

The Hourly chart shows a one month price explosion in GBP/USD from Mid-March 2020 low of $1.1415 to Mid-April high of $1.2653, in a clear cut Elliott wave five-wave sequence, followed by a complex corrective sideways price action to date. 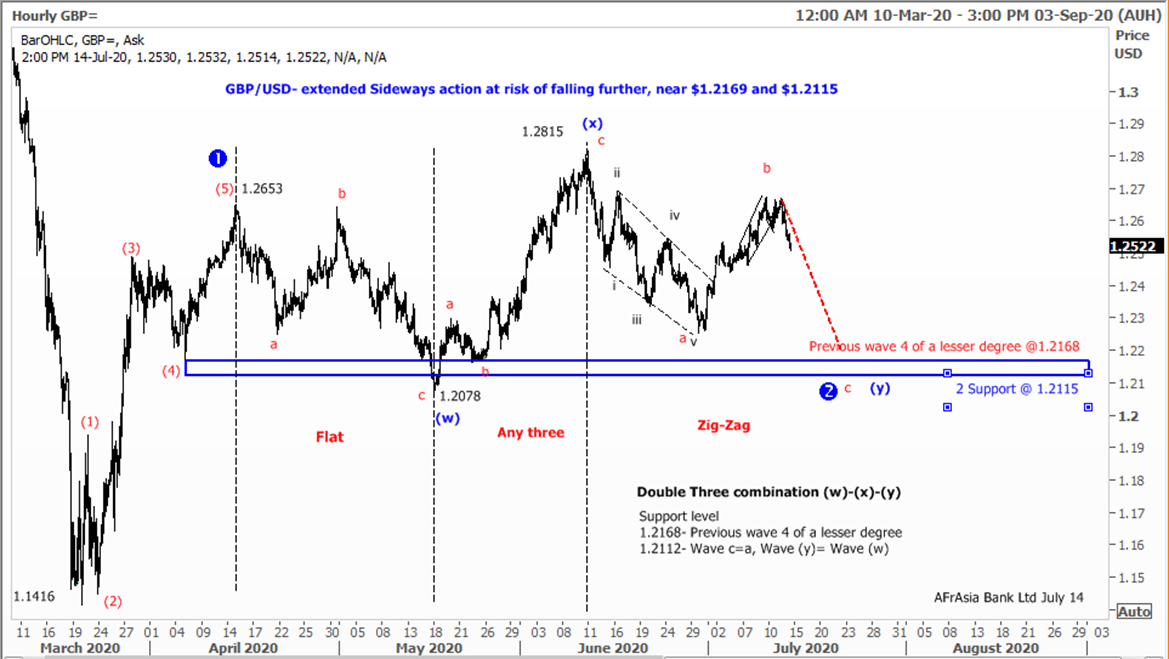 From Mid-April 2020, the Pound appeared to be caught into a continuous range bound price movement of $1.2078 and $1.2815. Elliott called this type of extended sideways base pattern a double three combination of two corrective patterns. A combination is composed of simpler types of corrections pattern, including zig-zags, flats and triangles. The simple corrective pattern components are labeled W, Y and Z.

An inspection of the double three combination on the hourly chart suggests the following: Wave (w) from April 15th to May 15th form a flat correction, while the rise from $1.2078 to $1.2815 was wave (x).Wave (y) is still unfolding into a possible Zig-Zag correction. It is likely that two corrective waves( a and b) of the Zig-Zag may have been completed at this juncture and that the market is in the process of tracing out Wave c of wave(y).

In the short term, Wave c of wave (y) could bottom at $1.2169 (within the area of the fourth wave of a lesser degree). While $1.2115 could prove as good alternative support based on typical ratio analysis guideline( Wave c=a, Wave (y)=(w)).

On the other hand ,any upside reversal would depend upon a break of $1.2665/70 area comprising highs market on last Thursday and on Monday. A successful break at $1.2670 would open the door for June month top near $1.2815.