EUR/USD rally Too Far Too Fast- Don't be spooked by a sudden retracement!

“All through time, people have basically acted and reacted the same way in the market as a result of greed, fear, ignorance, and hope. That is why the numerical formations and patterns recur on a constant basis”.

The Single currency fell to a low $1.1335 today from a high of $1.1495 on Monday as hope that global central banks would introduce stimulus to cushion the economic impact of the coronavirus outbreak boosted the appetite for riskier assets.

Market attention would now shift to the ECB event on Thursday.  Even though euro zone rates are already deeply negative, the central bank will be under strong pressure to act as the European outlook seems to be worsening.

“It took Giuseppe Conte, Italy's PM, less than 48 hours to move from locking down only the north of the country to all the country. In a dramatic press conference late on Monday, Conte announced that severe restrictions will apply to all the Eurozone’s third-largest economy. Italy's cases jumped to above 9,000 with mortalities nearing 500.

In addition, Spain announced it is closing schools in the most affected areas, including the capital region of Madrid. France bans gathering of 1,000 people and Germany confirmed the first deaths from coronavirus on Monday.

Concerns around Europe may later weigh on markets and send investors back to the safety of US debt, weighing on EUR/USD.-

From an Elliott wave perspective, the pair may have completed wave 3) on Monday and could be heading south in the coming days, probably to previous wave 4 of a lesser degree at $ 1.1100, completing wave 4) of an impulsive trend. 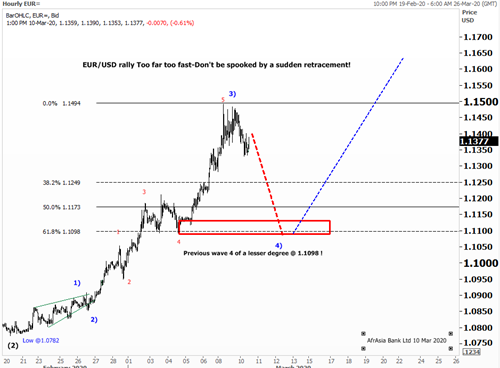 Previous article View archives Next article
Become a client
Need any help?Consult our FAQ
Or contact us on+230 208 5500 or afrasia@afrasiabank.com
Get the latest news, straight to your inbox
Subscribe by WhatsApp
Add +230 5255 2671 to your contacts and send "Register Me" to us by WhatsApp message
Join the conversation
Rates & Fees
View all rates and fees
Application Forms
REGULATORY BODY GUIDELINES
View all regulatory body guidelines
Our Shareholders
Swift Code AFBLMUMU
AfrAsia Bank Limited is licensed and regulated by the Bank of Mauritius.