Don't expect the euro to fly any time soon !

The Single currency is down for the fourth consecutive sessions and is currently sitting on the fence near previous low of $1.0770 printed on 6th of April ahead of the European leaders conference call meeting due today, while poor Euroland data weighed heavily on the currency this Thursday.

Indeed, Manufacturing and Services PMI in France, Italy and Germany came below expectations for the month of March as all economic activity grounded to a halt, reflecting the continuation of the COVID-19 crisis and the initial effects of the lockdown in European economies.

Later in this session, the European leader are due to hold a video summit over how to tackle the economic fallout of the crisis and with the probability of further stimulus on top of the agenda. This summit could potentially sow the seeds for further disagreement in the “Old continent” as France, Italy, Spain, and several other southern countries have called for issuing common European bonds – dubbed "corona bonds" – while the northern camps like the Netherlands and Germany opposed to it. Earlier, German chancellor Angela Merkel said calls from some EU countries for common debt with common liabilities were not the right way to go.

On the hourly chart, the dip to a new monthly lows near $1.0750 today and the Leading Diagonal pattern unfolding early this week suggest that the EUR/USD is technically looking bearish and could potentially prolong its decline to as low as $1.0391( wave (3) projection of an impulsive decline) in the coming months. 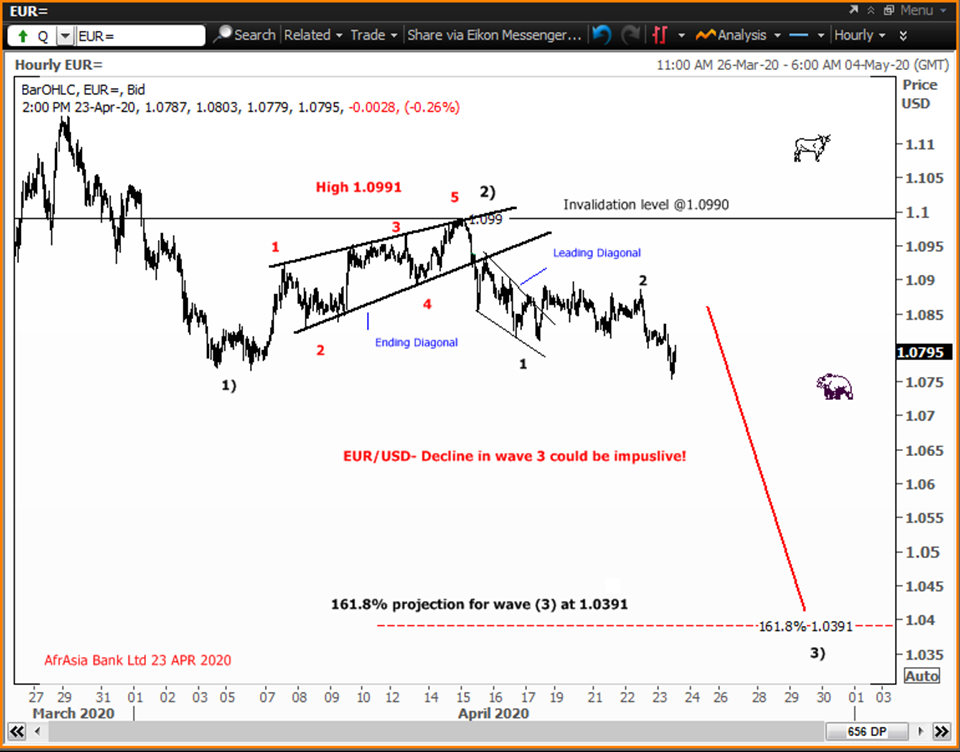 Previous article View archives
Become a client
Need any help?Consult our FAQ
Or contact us on+230 208 5500 or afrasia@afrasiabank.com
Get the latest news, straight to your inbox
Subscribe by WhatsApp
Add +230 5255 2671 to your contacts and send "Register Me" to us by WhatsApp message
Join the conversation
Rates & Fees
View all rates and fees
Application Forms
REGULATORY BODY GUIDELINES
View all regulatory body guidelines
Our Shareholders
Swift Code AFBLMUMU
AfrAsia Bank Limited is licensed and regulated by the Bank of Mauritius.