Swiss Franc & Japanese Yen : A Match Made In Haven ?

Can CHF and JPY be sustained as Safe Havens in an era of potential depression aroused by Covid-19 pandemic? A safe-haven currency is an asset that is expected to retain or gain value in dramatic economic crises, offering protection from market downswings.

Japanese Yen.  While Japan holds a negative interest rate at a record low of -0.75%, the US Federal Reserve recently dropped its interest rate precipitously to 0.0-0.25% in order to curb the current outbreak. As a result, interest rate differential shrunk which prompted the disappearance of dollar-yen carry trades and the reduction in USD liquidity. Carry trades usually involve borrowing in currencies with low-interest rates and investing in proceeds where interest rates are higher, thereby earning easy profits on net interest income. With dampened investor sentiment in play, investors are most probably short USD/JPY, looking for an opportunity to buy back USD/JPY and US equities in the coming months when risk sentiment improves. However, it is also worth considering the risk that the Bank of Japan may intervene to support its export-driven economy through a weakening of the Japanese Yen.

Déjà Vu.  Safe-haven assets around the world got a fillip from rising risk aversion this year. This was blatant in the wake of the 2008 Great Recession where a high default rate in the United States subprime home mortgage sector cascaded to damaging financial institutions globally, the Yen and Swiss Franc vaulted by 42.3% and 39.15% respectively. Japanese investors sold risky-dollar dominated assets against JPY, hastening the strength of the yen, while American investors with carry-trade strategy accumulated FX costs in carrying their yen loans and triggered the sell-off of USD/JPY, pushing the yen even higher.

On this account, CHF and JPY could paint a bleak picture of financial refuge with markets in turmoil in the foreseeable future.

A triangle pattern subdivides into five overlapping waves A-B-C-D-E, formed in a position prior to the final wave in an impulse or a correction. From an Elliott Wave standpoint, USD/CHF is forming a bearish contracting triangle pattern in the immediate term with targets: Wave d of B at 0.9613 and Wave e of B at 0.9677. From there, the pair may lose gravity to shape Wave C of zig-zag Wave (2), aiming at a downswing to a narrowing region of 0.9464 to 0.9390 representing 61.8% Fibonacci retracement of Wave (1) and 100% Fibonacci projection of Wave A through B. Any violation to the line at 0.95 of March 30th would be considered a clear bearish signal. Alternatively, broader invalidation of Elliott Wave structure rest at 0.9903 of March 20th high. 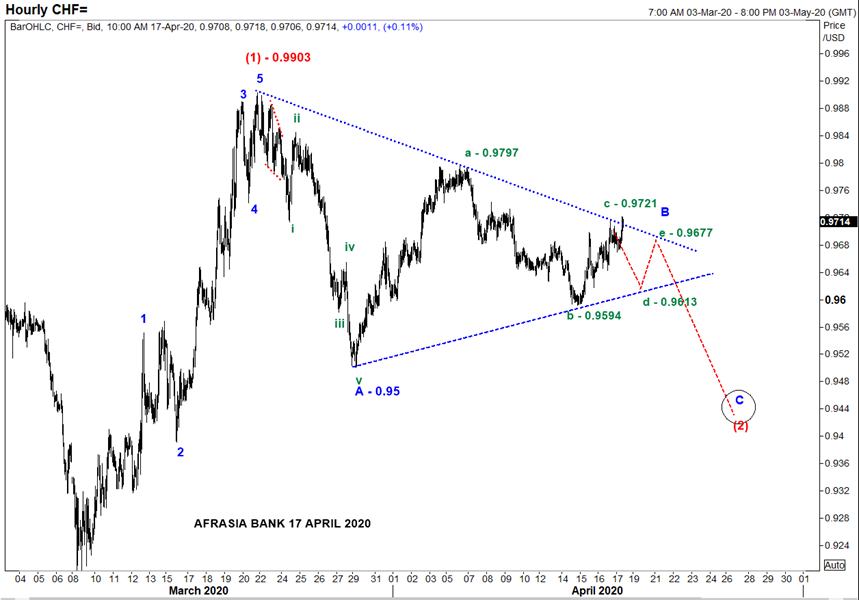 As per Elliott Wave Analysis, USD/JPY concluded a W-X-Y Double Zig-Zag structure of Wave (2) reaching a high of 111.64 on 27th March 2020. As demonstrated on the hourly chart, after hammering into an impulsive Wave 1, ending at 106.89 on April 1st, the pair is percolating into a regular flat pattern, possibly finishing its structure of Wave c in the neighborhood of 109.37 to 109.84. In Elliott literature, a flat correction contains three waves a-b-c that tends to occur when the larger upcoming trend is strong. So on the near term radar, the pair could cherish upside momentum finding some pullback at support line stretching from March 1st. Resumption of a holistic bearish trend would be validated if the pair breaches 106.91, which would uncoil into Wave 3 with potential to an impulsive fall, targeting 104.42 to 101.45. Invalidation of such structure remains at 111.64. 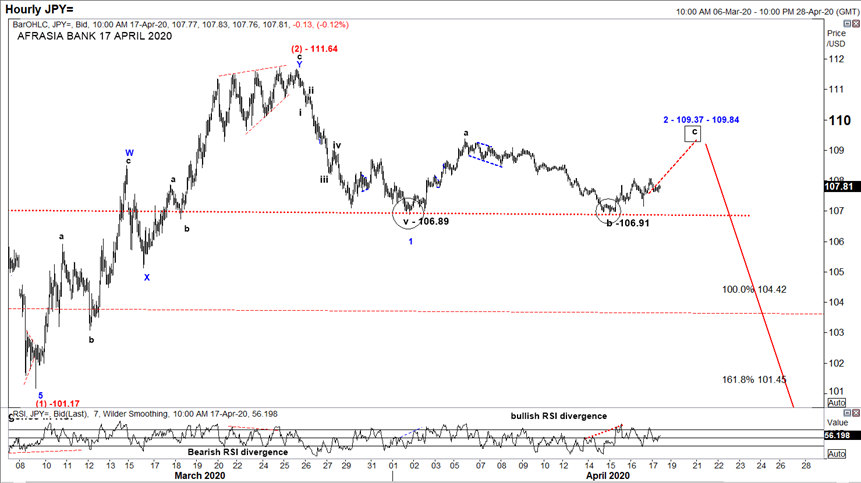 The chart below shows that USD/CHF and USD/JPY exhibit a strong positive correlation over the past months, giving directional bias for the pairs.

From a trading perspective, CHF/JPY has eased off and stabilized in the consolidated region of 109.64 of March 8th and 114.38 of January 16th. Recent price action raises the scope for a larger correction as CHF/JPY negates a bullish contracting triangle formation. Wave D of triangle (4) may unwind into a zig-zag shape, immediate target at 112.91 to 113.64 as shown on the hourly price chart. In turn, the pair may endure some sizable pullback to form Wave E, back to the level where it is now. Therefore, CHF and JPY may move in tandem in the coming months. Breaching the resistance at 114.38 would invalidate the Elliott Wave analysis and would mark the end of the sideways correction.

The sideways price action formed a stable CHF/JPY. Therefore, since USD/CHF and USD/JPY are positively correlated, and speculatively manifest bearish performance in the technical analysis, there is reasonable evidence to suggest that CHF and JPY are

A Match Made In Haven !

Download
Previous article View archives Next article
Become a client
Need any help?Consult our FAQ
Or contact us on+230 208 5500 or afrasia@afrasiabank.com
Get the latest news, straight to your inbox
Join the conversation
Rates & Fees
View all rates and fees
Application Forms
REGULATORY BODY GUIDELINES
View all regulatory body guidelines
Our Shareholders
Swift Code AFBLMUMU
AfrAsia Bank Limited is licensed and regulated by the Bank of Mauritius.