Australian Dollar, a scent of anxiety as domestic data and new lockdown underwhelming

“Whatever you are, be a good one.”— Abraham Lincoln

The Australian Dollar languished to $0.7160 from the recent 18-month peak at $0.7242 last week on recent renascent of the U.S dollar, while sluggish domestic data underlined the economic damage being done by the new lockdown in Victoria, Australia’s second most populous state.

The sour economic news from Australia unleashed a scent of anxiety this week, with NAB business survey out Tuesday showed confidence took a turn for the worse in July and consumer confidence falling sharply in August, while Annual wage growth data on Wednesday slowed to its lowest on record in the June quarter, highlighting the weak outlook for incomes and spending power in the domestic economic recovery.

Elsewhere in the financial markets, the U.S dollar has trimmed some of its losses, as risk sentiment took a toll after a top U.S senate official said negotiations in Congress on an additional stimulus package for the virus pandemic have not progressed, while U.S.-China tensions stayed frosty after President Donald Trump’s ban on TikTok and WeChat last week.

The hourly chart showed an explosive five-month rally on the AUD/USD from a low of $0.5504 in Mid-March 2020 to a fresh yearly high of $0.7247 on 7th of August 2020. From an Elliott Wave perspective, the protracted surge on the Australian Dollar is a clear cut five wave sequence to the upside, with the right look of three waves (1), (3) and (5) in the direction of the main trend and two against the trend (2) and (4) for a total of five waves.

However, In the wake of the high printed at $0.7247 last week, the AUD bulls appears to be lacking follow-through, suggesting that the Aussie could find it hard to keep its long-term bullish bias against the U.S dollar.

In a bearish scenario, the pair may suffer a deep decline that could substantially correct the price level of the previous impulsive sequence, since March 2020.
Relevant support level could come at $0.6832(previous wave 4 of a lesser degree) on the downside, and a break below it should open doors for a steeper failure toward the $0.6400 price zone.

On the other hand, any subsequent move above $0.7200 might confront immediate resistance near previous high at $0.7247, above which the pair is likely to aim to reclaim the $0.7300 round-figure mark. 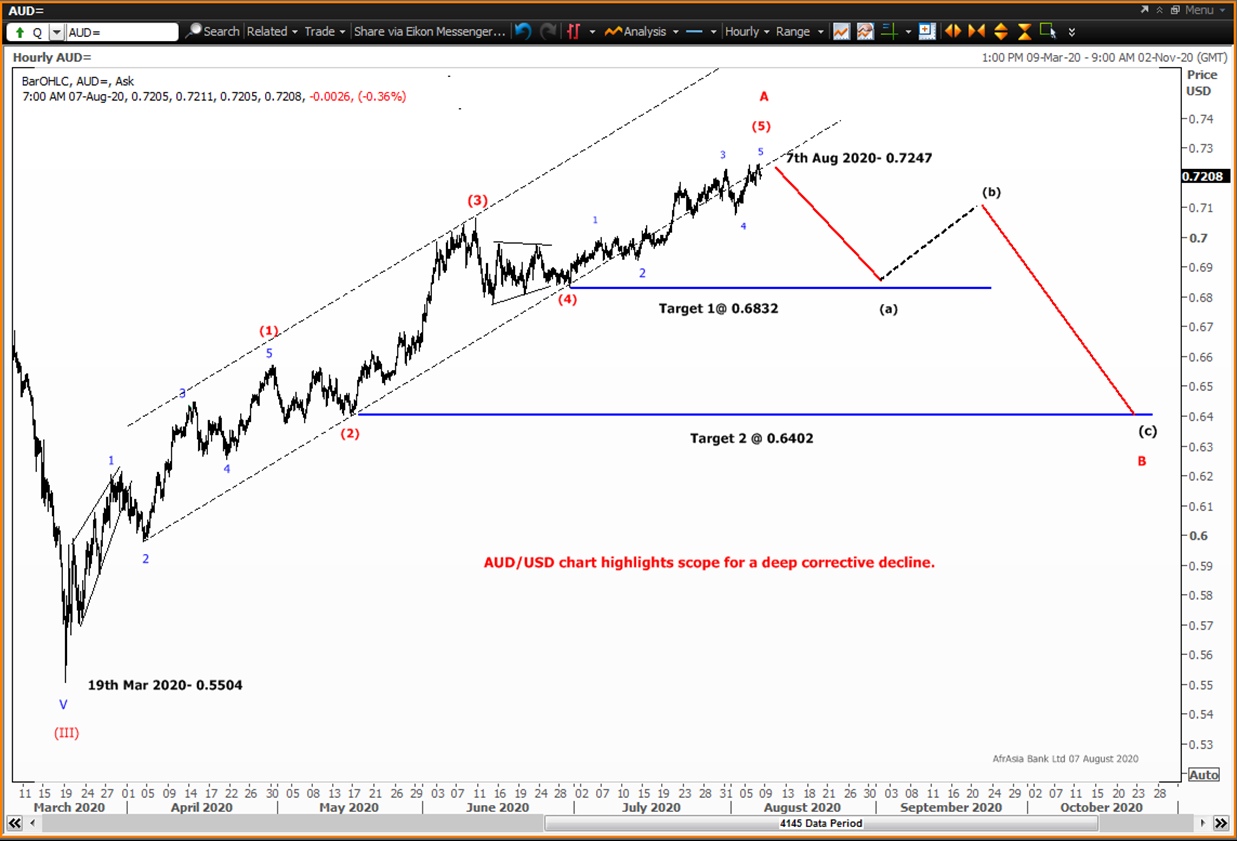