The Trade war effect, The Chinese yuan and Commodities

The U.S trade relationship with China has been contentious for the last two decades. Despite evidence to the contrary in recent years, U.S believes that China is a currency “manipulator” and has been deliberately influencing their exchange rates to make them more competitive.

U.S President, Donald Trump, shocked the market last week by trying to impose an additional 10% tariff on the $300 billion worth of goods on Chinese imports. Investors fled the stock markets to safe haven alternatives as a dramatic escalation of the trade war between the two big economies begun. Yesterday, the Chinese government fired the opening of a currency war by devaluating the yuan above the symbolically important level of 7.00 for the first time in decades. The last time it traded at these level was during the 2008 financial crisis. This can prove to be a dangerous move which can potentially rattle the stock and commodity markets. China believes this would offset partly the 10% tariffs and prevents its GDP growth being hit by 50 basis points. China has also announced on Monday that its companies have halted purchases of American agricultural goods. This has driven stocks deeper into the red, with the Dow finishing 2.3% lower, the S&P 500 3% lower and the Nasdaq Composite 3.5% lower, biggest decline since last year. The Japanese yen, the Swiss Franc, US Government bonds and Gold rallied upon the news. Devaluating the Yuan is one way China has of retaliating against the tariffs to protect their local producers.

Impact on Commodities and Trades set up

China has been a major importer of Milk, Soya-meal, Copper and Cotton from the U.S while U.S has been a major importer of fruits and Juice from China. Devaluating the Yuan against the dollar would allow China to export more to the U.S than other competitors and at the same time reducing its imports from the U.S and increasing imports from other competitors. This could have major drawbacks on the U.S by increasing its trade deficits, reducing production and increasing U.S jobs loss. By allowing the yuan to move lower, China is sending a strong signal to the market that Chinese demand for commodities which has been already slowing due to a strong dollar, would continue to decline and they are prepared to deploy its currency as a weapon in the trade war with Washington.

Cotton prices closed limit down at their lowest level in 10 years as demand from China would decrease as tension escalates. Increased Local production could weigh further on the price in the near term. From an Elliott wave perspective, the price could be hitting a new low wave 5 in the short term.

Copper prices usually considered as a barometer for the manufacturing sector hit an old time low as trade war escalates. China imports half of the world’s total production of copper. Copper prices dipped nearly 4% on Tuesday while Aluminium prices closed 3% lower. Assuming the metal prices in U.S dollar is constant, then a fall in the Yuan against the green back increases the yuan price of the metal. This encourages Chinese producers to produce more of the metal and consume less of it, thus decreasing demand for the metal and increase exports and lowering the global price. As per Elliott wave perspective, Copper prices have completed the 5 wave pattern. An A-B-C corrective pattern might be set up in the short term before resuming the downtrend. 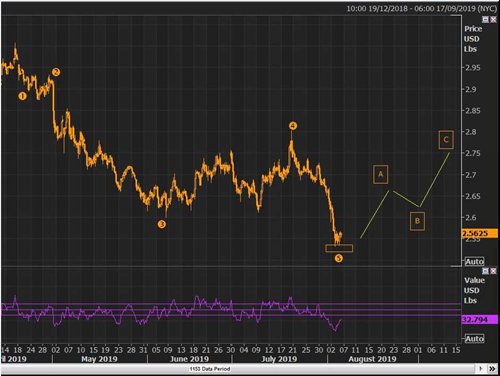 On the other side, the price of Soya bean meal spiked as Chinese buyers are turning back to Brazilian markets as the yuan is undervalued only against the dollar and not the Brazilian real. Buyers from the Asian nation have already started bidding for shipments in August, September and October 2019. Brazilian exports could increase causing a squeeze in the market as they can’t independently produce enough to supply to china. From an Elliott wave perspective, a short term rally can push the prices higher. 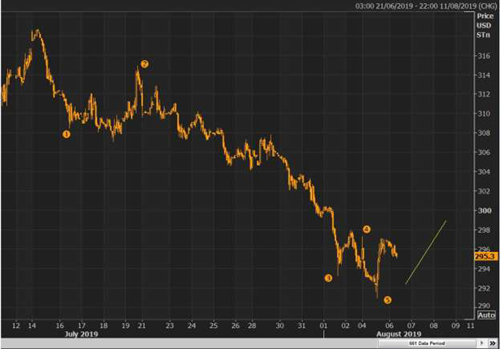 On the other side, we have to remember that Chinese investors are some of the biggest investors in the gold market, which causes the gold market to rally as they seek alternative investments. As per Elliott wave perspective, Gold can possibly make a new high in wave 5. 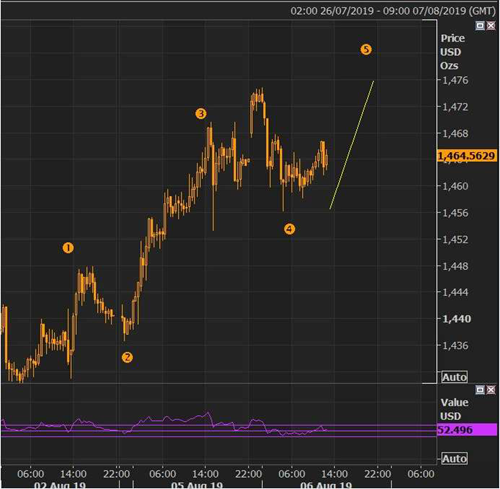 Disclaimer: This communication is provided for information and discussion purposes only. Unless otherwise indicated, it does not constitute an offer or recommendation to purchase or sell any financial instruments or other products. AfrAsia bank does not guarantee or warrant the accuracy, reliability, completeness of the information in this publication.