LONDON, July 30 (Reuters) - Sterling crashed to 2-1/2 year lows against the yen on Tuesday and fell towards the $1.21 mark versus the dollar as the growing likelihood of a disorderly Brexit led investors to hedge or cut their exposure to British assets.

A disorderly exit from the Euro bloc is widely expected to cause severe upheavals for businesses and consumers resulting in damage to the UK economy.

The Pound plummeted to a new 2-yr low at 1.2121 this morning, losing almost 345 pips from Friday’s high of 1.2466, after the Prime Minister Boris Johnson announced that the British government was “turbo-charging” preparations for a no-deal exit from the EU, which is described as being the government’s “No 1 priority”.

Adding to this, Johnson’s spokeswoman was further quoted saying that the PM wouldn’t even meet EU leaders if they are not willing to change their positions, which did little to ease market fears that the UK will eventually crash out of the EU on Oct 31 2019.

On an Elliott Wave perspective, the crash to $1.2121 this morning may have ended into a five wave impulsive decline in Wave C, with wave v of wave C being a thrust lower from a triangle formation in wave iv, of wave [B].

Technically speaking, we won’t be surprised to see a clear U-turn on the Pound Sterling from the current level. Furthermore, a strong rebound above $1.2523, previous wave IV of a lesser degree, would probably confirm the completion of wave [B] of a corrective setback that started early on 7th October 2016 from a low of $1.1821. 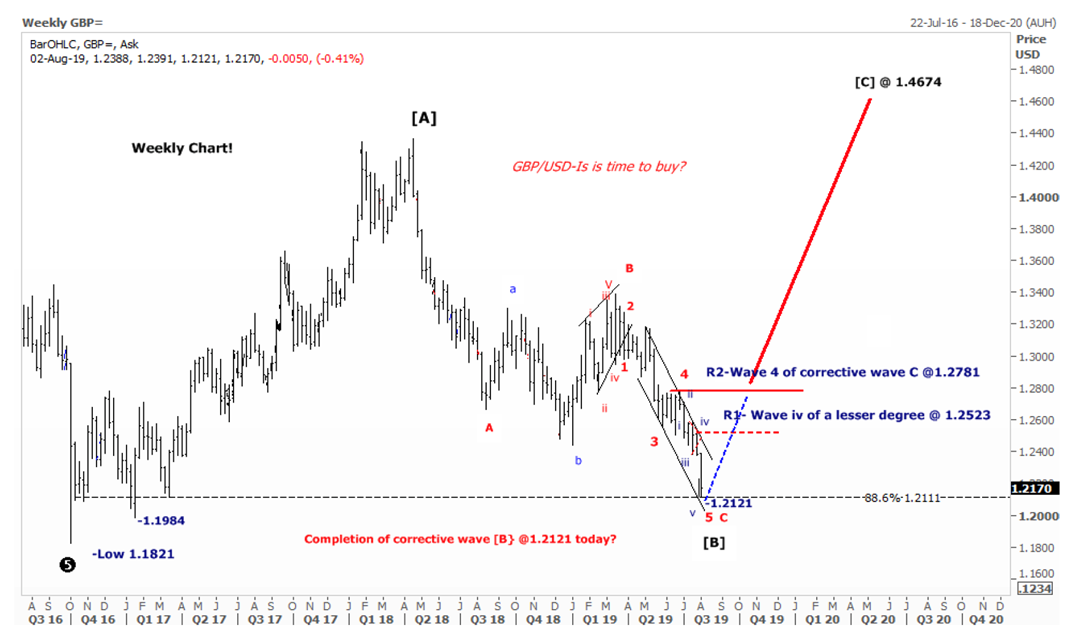