EUR/USD: What’s good for the greenback is often bad news for the euro!!

Trading Proverbs: "Have the patience to wait, the courage to get out and the integrity to follow your plan"- John Carter

The US dollar has posted strong gains to start the last week of April, courtesy of the solid performance of yields in the U.S money market, as 10-year U.S Treasury bond yields pushed above the 3% threshold for the first time since January 2014, meanwhile the 2-year treasury bond yield is on the brink to kiss the 2.5%, the highest level during the financial crisis back in 2008.

The rising U.S treasury yields suggested that market is anticipating higher interest in the U.S, given that geopolitical tensions abated and incoming U.S data have been mostly positive. Expectations amongst investors are for at least two to three more U.S rate increases before year end. On Bloomberg calculations, Fed fund futures yields pricing for the next rate hike in June rose from 92% to 97% chance.

What’s good for the greenback is often bad news for the euro, as the Single currency has been languishing in the doldrums over the last few days, falling sharply from $1.2400 last week to $1.2184 in Asia on Tuesday, the lowest since 1st of March, on the back of widening U.S treasury spreads over European yields which bolstered demand for the greenback amongst investors.

Aside from the rebounding strength of the U.S dollar caused by exceptional U.S yield driven strength, the euro has been on the back foot following recent slew of weak German and Eurozone data, dragging the currency lower.

The euro is likely to remain in focus this week amidst European Central Bank interest rate  decision shall take centre stage on Thursday. Market is not expecting the ECB to make any major policy changes at this meeting, but further guidance on the potential timing of the end to the QE stimulus and any possible future interest rate increase will be closely watched.

In light of current conjectures, the Common currency is seen to remain under pressure as a dovish message from ECB’s President Draghi at the meeting on Thursday is most likely to be the outcome. 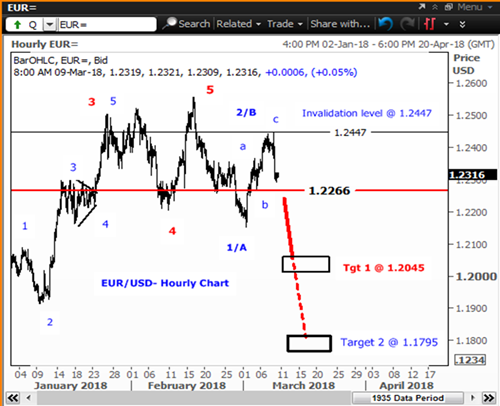 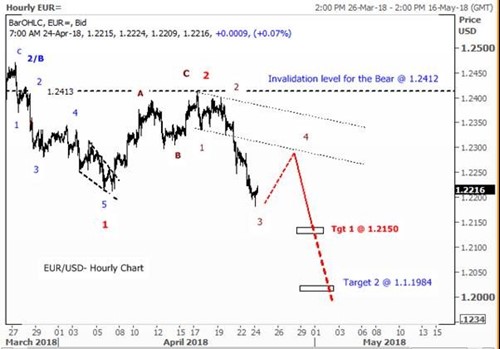 On the other hand,  a continued sideways consolidation in an Elliott wave bullish triangle pattern could still be in play , if EUR/USD could hold above $1.2152  i.e. wave A of the triangle pattern,  as highlighted in scenario 2 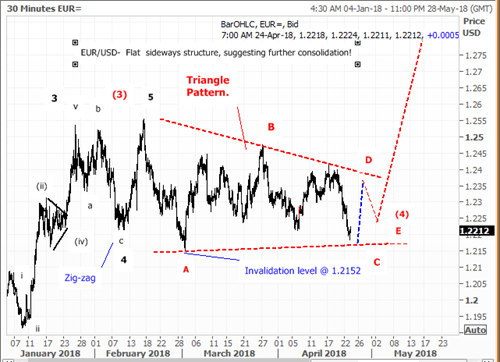