EUR/USD warming up for a big turnaround ahead of EU summit and FOMC minutes this week.

Trading proverbs: “What makes the desert beautiful' said the little prince, 'is that somewhere it hides a well” - Antoine De Saint Exupéry

This week, the market headlines will be bombarded by key events coming from both Europe and the United States which would presumably turn out to be the catalyst for further moves on the forex markets.

Starting with Europe on Monday, where Italy’s populist government is to submit its three-year budget plan to EU Commission for confirmation that Italy is in line with the “stability and Growth Pact” among the Euro members. However, the European Union officials have expressed their worries on Italy’s 2.4 percent of GDP budget gap for 2019 announced in late September which were seen as too high. These concerns have indeed caused some sell off on Italian bond papers and also kept the single currency at bay.

A lot of attention will also be paid to the European two days Summit, starting on Wednesday 17th October, with the EURO & the Pound taking the centre stage. Brexit negotiations between the UK and EU are scheduled to be on the table at the EU leaders’ working dinner on Wednesday evening, where both parties will try to resolve any remaining issues in the divorce terms.

The Global market will also look for clues in the minutes from the FOMC ’s latest monetary policy held last month, which is due on Wednesday at 1800 GMT, though the minutes will come in the wake of President Donald Trump’s criticism of the FED’s recent rates hike. However, the Fed is still expected for another hike in U.S rate in December followed by three more rates hike next year, and possibly one in 2020 on the back of upbeat U.S economic data this year.

Technical outlook: EUR/USD warming up for a big turnaround ahead of EU summit and FOMC minutes this week.

As highlighted in mid-September 2018, we were looking for an expanded flat correction down in wave B before resumption of the corrective uptrend in wave C to complete a Zig-Zag correction in wave 2. Indeed, the single currency sparked a strong rally to as high of $1.1610 last Friday in the aftermath of the low of $1.1429 three days earlier. 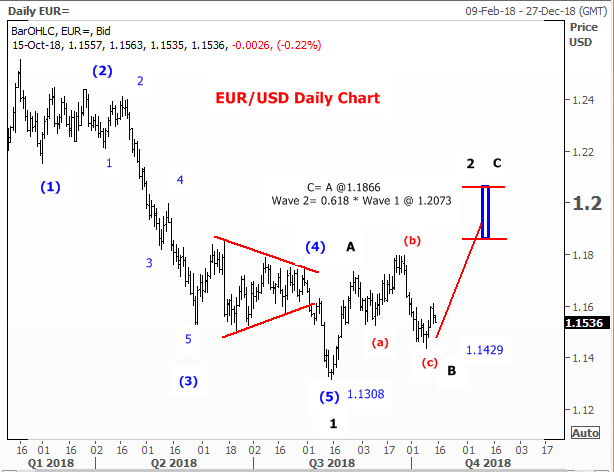 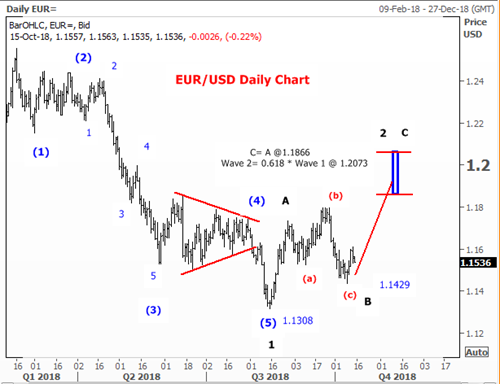 On the Daily Chart based on current Elliott Wave structure, we expect the EUR/USD to grind higher in the coming weeks/ month, where wave C of wave 2 could find strong support in the range of $1.1866 and $1.2073. 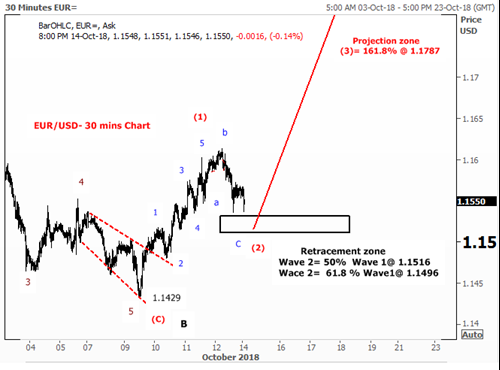