As widely expected, the European Central Bank (ECB) left its monetary policy and guidance unchanged on last Thursday .The ECB statement said that “the Governing Council expects the key ECB interest rates to remain at their present levels for an extended period of time, and well past the horizon of the net asset purchases”. Moreover, the stimulus program of EUR 30 billion/month is scheduled to remain in place until September.

The 19- countries currency was initially bid, but subsequently lost its footing after ECB President Mario Draghi was neither hawkish nor dovish in his statement which obviously failed to toss a lifebuoy for the euro. The pair finally sank to a one month low of $1.2050 on last Friday, its lowest since Jan.12, after ECB has been perceived to be playing safe, following a disappointing turn out in the Eurozone economy in Q1.

The United States’ currency might add some pressure on the euro this week as the U.S. Federal Reserve will be announcing key interest rate at its Federal Open Market Committee (FOMC) meeting on Wednesday at 1800 GMT followed by U.S nonfarm payrolls report on Friday. Recently, the U.S dollar has been buttressed by rising government bond yields and interest rate hike expectations compared to its counterparts, notably the euro which seemed to be lagging behind.

The Market is not expecting the Federal Reserve to raise interest rates on Wednesday, after its latest rate hike in March which now stands at a target range of 1.50-1.75%. Expectations, however, have been rising that the Fed may likely be on track to deliver four rate hikes this year. A more hawkish-than-anticipated statement could drive the US dollar to break significantly higher across the board. Conversely, if the Fed disappoints by not making any alteration to its wording, the greenback’s rally could start to lose some steam in the near term.

Another bigger test for the U.S. dollar against its counterparts will probably be Friday’s nonfarm payrolls report, and in particular, the wage growth figures. The Fed would be pleased to see a pick-up in earnings in order to be convinced that inflation is on a continuous path upwards. If such a likelihood is indicated on Friday, the US dollar would be poised to remain in the driving seat against the majors.

As highlighted early last week, the EUR/USD was calling for a deeper drop in the near term and the decisive break below $1.2150 post ECB has invalidated many bullish counts amongst traders, but instead confirmed the initial count for a strong move to the downside.

On an Elliott wave perspective, the EUR/USD might be currently travelling in an intermediate wave 3 of an impulsive decline that started early on 16th of Feb. 18. A possible strong sell-off to $1.1984 could be in the pipeline in the coming days, while the medium term looks even bleak for a potential move to $ 1.1825 on the euro. On the flipside, the pair might face resistance at $1.2210 followed by 1.2260 in case of bearish FOMC and Nonfarm payrolls this week. 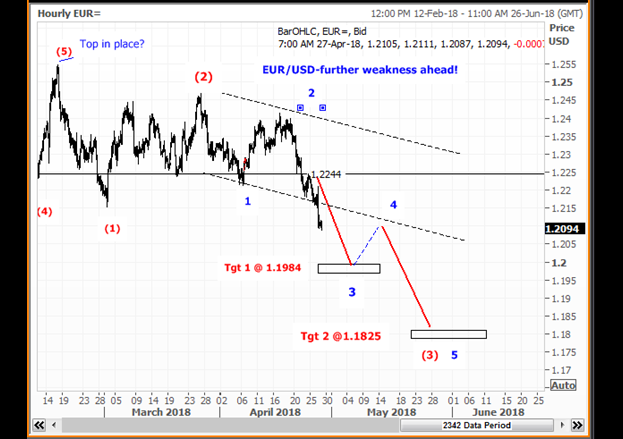