EUR/USD feeling the heat versus the greenback!

The single currency briefly spiked to a 3-yr high of $1.2554 last week before turning sharply down to a low of $1.2366 on Monday undermined by some dovish talks by ECB’s Coeure who said that the ECB would raise its interest rates before QE bond buying ends.

On the hourly chart, over the last three weeks, the EUR/USD seemed to be trapped into a sideways corrective price pattern which suggest a further consolidation to the downside near $1.2150/1.2210 in the coming days/week.

On the topside, a clear break above $1.2554 will give EUR enough impetus to march higher.

Today, watch out for German SPD vote today on coalition with Merkel’s conservative party for further direction on the EUR!! 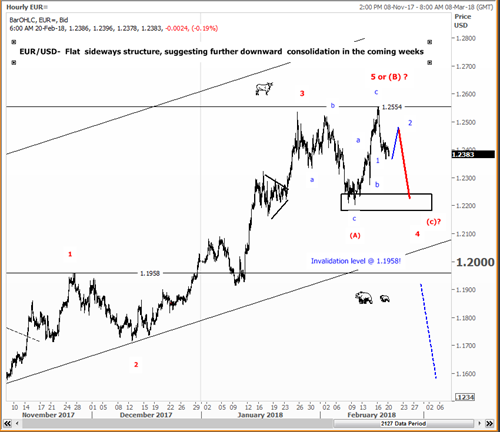