The common currency recovered from a low of $1.1665 on Friday to trade at $1.1732 this morning, following a mixed employment report from the U.S.

On the hourly chart, we suspect that a possible Ending Diagonal pattern is currently in progress. An Ending diagonal is a special type of Elliott Wave pattern which usually indicates exhaustion of the larger movement on a currency pair. It usually takes the form of a falling wedge and is followed by a swift & sharp reversal.

The rise on the EUR/USD from the low of $1.1667 on Friday to currently level may indicate that we are now trading in Wave 4 of that Ending Diagonal pattern, and one last leg lower in Wave 5 might still be on the cards, possibly towards our Head & Shoulder targeted level of $1.1600/1.1650 highlighted on 20th September. However, a thrust above $1.1790 would suggest a turning point on the euro! 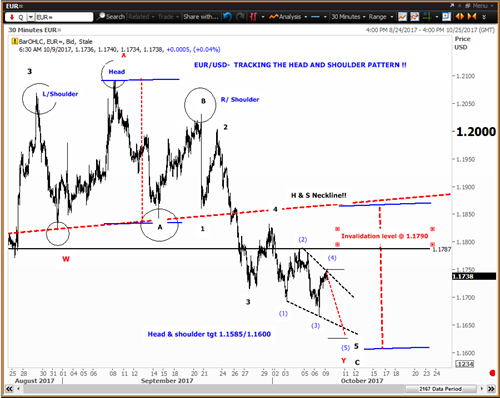