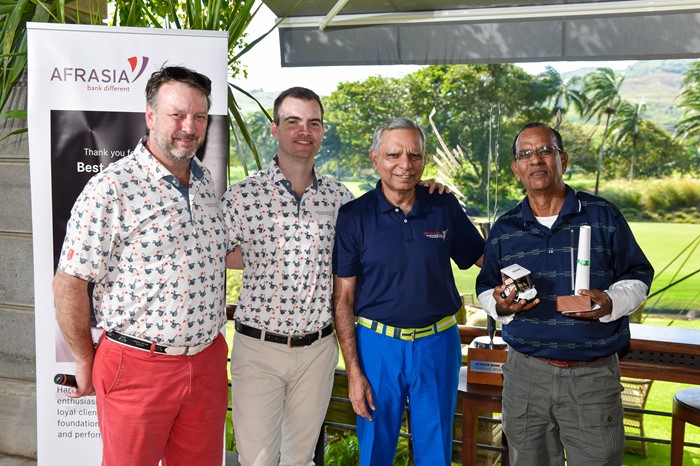 AfrAsia Bank inaugurated its first golf today at the Heritage Golf Club in Bel Ombre where our golf amateurs competed in teams of four to qualify for the PRO AM of the AfrAsia Bank Mauritius Open, which will take place in about three months from 05 to 08 December 2019.

The winners of this first competition were Kris Mussai who won with a score of 40 points, followed by Iqbal Belath and Soussila Hurpaul who completed the podium with a score of 38 and 37 points respectively.

"Over the past five years, the AfrAsia Bank Mauritius Open has attracted the attention of internationally renowned golfers," said Sanjiv Bhasin, CEO of AfrAsia Bank. "This is a source of encouragement for the organizers and demonstrates that we are on the right track as we keep improving this event every year. We have planned a series of initiatives to attract our golf enthusiasts and enable them to discover golf tournaments of high quality while maintaining a spirit of congeniality. "

The AfrAsia Bank Mauritius Open (ABMO) is the only worldwide tri-sanctioned tournament endorsed by the Sunshine Tour, the European Tour and the Asian Tour.  No less than 156 international golfer will be competing to win the prestigious prize of EUR 1million. The last ABMO, held at the Four Seasons Golf Club Mauritius at Anahita in December 2018, was won by the American Kurt Kitayama. The tournament was broadcasted worldwide and reached more than 350 million viewers. This year's tournament will consist of 48 professionals from each of the three Tours and 12 invitations participating in a 72-hole race championship, which will count for the Individual Order of Merits of the Tours, including the Dubai Race and the Official World Golf Ranking.