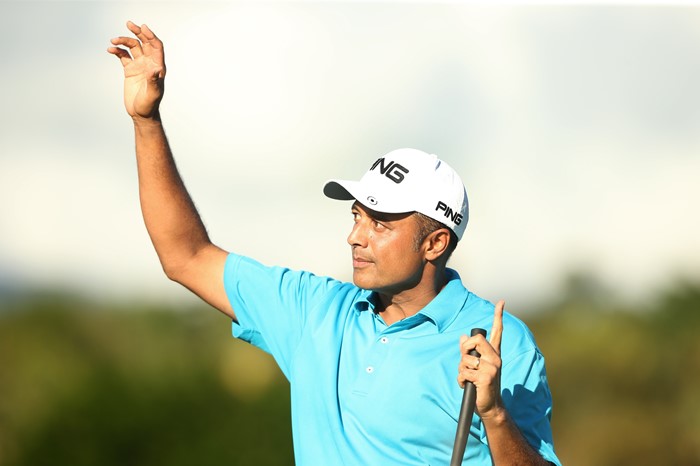 After a 16-hour flight and with no practice round, India’s Arjun Atwal opened with a course record nine-under-par 62 for a four-stroke lead in the first round of the AfrAsia Bank Mauritius Open at Heritage Golf Club on Thursday.

Atwal admitted he was both “pleased and shocked” with a round that started with two consecutive birdies and included another three birdies in five holes from the sixth, and then saw him close with an eagle and two birdies in his last five holes on this par-71 course.

His round bettered the previous course record of six-under-par 65 held by the four players of past champion George Coetzee, Carlos Pigem, Jeunghun Wang and Thorbjørn Olesen, which they posted in the 2015 edition of the tournament here.

Atwal’s record round took him clear of the chasing pack of five players including South Africans Louis de Jager and Ockie Strydom, Germany’s Sebastian Heisele, Brazil’s Adilson da Silva and Miguel Tabuena of the Philippines on five under. World number 22 Louis Oosthuizen opened with a four-under-par 67. Coetzee, who won here in 2015, also opened with a 67, as did the in-form Dylan Frittelli.

“I was in Kuala Lumpur the last two days to announce the players in Team Asia for the EurAsia Cup and I had some media activities to do. I had no practice round and went straight to the first tee,” said Atwal, who is a three-time winner on the European Tour and also the first Indian golfer to win on the PGA Tour in the 2010 Wyndham Championship.

“I’m pleased and shocked. I took a very long route coming here. I came through Dubai and it took me 16 hours to get here. I was tired and I didn’t really expect anything. Sometimes when you don’t expect much, you get a lot out of it. I found it pretty tough out there but I didn’t make any mistakes and I had a hot putter.”

Oosthuizen, who is making his debut in this tri-sanctioned tournament between the Sunshine, European and Asian Tours, also said he found conditions somewhat tricky on the first day.

“I was four under through seven, then it got tricky. The wind really picked up and there are some good holes out there. A lot of risk and reward. You’ve got to be careful because there are hurdles along the way the whole time.”

Scores from the first round of the €1 million AfrAsia Bank Mauritius Open, played at the par-71 Heritage Golf Club on Thursday: