“Try, try, try, and keep on trying is the rule that must be followed to become an expert in anything." - W. Clement Stone

South Africa witnessed a political and financial crisis after President Jacob Zuma fired his internationally respected finance minister Pravin Gordhan in a cabinet reshuffle on last Thursday night. Gordhan’s replacement by Home Affairs Minister Malusi Gigaba did little to calm the markets last week, given that Pravin Gordhan was widely seen as a competent Minister of Finance for Africa’s biggest economies. He was admired for standing up against the corruption prevailing in Zuma’s government. Also, Gordan’s firing by Zuma was perceived as another setback to an economy that grew just 0.5 percent last year and has an unemployment rate of nearly 27 percent.

The dismissal of Gordhan later led to a rating downgrade to “junk status” by credit ratings agency Standard & Poor’s on Monday .The agency stated that political and institutional uncertainty after Gordhan’s firing has placed South Africa’s fiscal and growth outcomes at risk. The country is currently rated one notch above junk at Fitch rating agency, and two notches above junk at Moody’s. Rating agency Moody’s has recently indicated that it is reviewing the Baa2 credit rating it assigned to South Africa and the process could take one to three months. Meanwhile, all the big banks in South Africa came out on Reuters, mentioning they are well positioned to withstand the impact of sovereigns credit downgrades.

On the financial markets, the South African Rand hysteria started early on 27th of March, when Zuma ordered former finance minister Pravin Gordhan to return home immediately from an investor roadshow abroad. In a knee jerk reaction, the Rand fell 4% from an uninterrupted 20 months high of 12.30 against the USD on the news. It was down almost 13 % to 13.94 against the U.S dollar on Tuesday, following Gordhan’s dismissal and after the country’s credit rating downgrade by Standard & Poor’s. However, the Rand recovered some of its losses late on Tuesday on hopes President Zuma may be forced to step down on mounting calls from unions, religious leaders, civil society and the opposition, following the reshuffling of his cabinet and his change of finance ministers that triggered the credit rating downgrade.

Technical outlook - Sentiment towards the Rand has now turned negative.

The Rand has turned bearish since last week following the recent turmoil in South Africa. On the hourly chart, we do see potential for more weakness in the Rand above 14.50 against the U.S dollar in the coming months. However, in the coming days, the USD/ZAR could be dragged down to 13.25/30 ahead of U.S non-farm payroll data on Friday before heading north again. 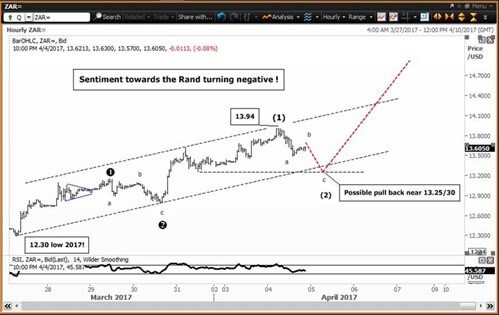