“When you have eliminated the impossible, whatever remains, however improbable, must be the truth!" - Sir Arthur Conan Doyle, Sherlock Holmes

The U.S dollar has been in the spotlight over the last few months on the back of Donald Trump’s surprising victory in the last U.S presidential election on November 8 2016. In the weeks following Donald Trump’s election, investors got overwhelmed about the potential for tax cuts, fiscal stimulus and deregulation in the U.S, bolstering the greenback across the board. However, sentiment in the financial markets appears to have shifted from optimism to pessimism recently, as persistent uncertainties regarding Trump’s proposed fiscal policies, trade protectionist measures, FX policies stance, together with the less popular measures on immigration are coming to the fore.

Meanwhile, in the Eurozone, the heightened political uncertainty in the pending election in France has also sparked a sense of nervousness in the financial markets. France’s Francois Fillon who just few weeks ago, seemed to be winning the Presidential race is falling well behind in most recent polls after being accused of paying his wife and children from public fund for a fake job. On the other hand, Marine Le Pen who launched her presidential campaign, promising to dump the Euro, fight globalization and close the borders on immigrants, encouraging investors to scatter away from riskier assets given what has happened in global elections of late.

In the meantime, Greece, the IMF, and its EU creditors tried to hammer out a deal on the next stage of the country’s EUR 86bn bailout funds. Greece needs to agree economic reforms with its EU partners to unlock the next tranche of bailout funds before its debt repayments due in July. A meeting of Eurozone finance ministers on 20 Feb. is widely seen as the last chance to reach a deal.

This week, the market will focus on Fed Chair Janet Yellen’s semi-annual testimony on the monetary policy before the Senate Banking Committee and House Financial Services Committee on Feb. 14 & 15 respectively. Yellen’s tone on the economic outlook and rate hikes will be closely scrutinized to shape the direction of global financial markets.

Technical side: EUR/USD- The chart suggests a possible bullish set-up in the coming weeks/months!

The overlapping rally from the low of $1.0341 to $1.0830, on the chart, was predictive for a reversal to occur which in fact happened last week. But, the decline in EUR/USD over the last few days did not occur in an impulse manner, suggesting that a possible bullish structure might be still on the cards. 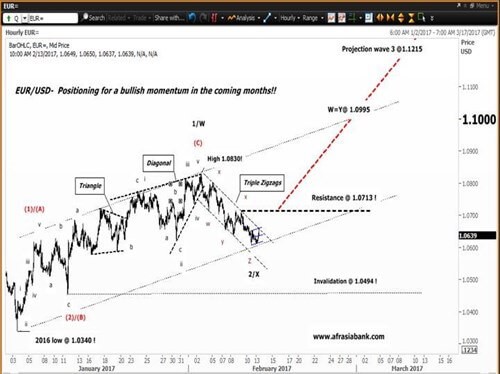