"Care about what other people think and you will always be their prisoner."- Lao Tzu

Emmanuel Macron, the independent candidate of the centrist political Movement En Marche!, became officially the New French President on Sunday after beating out the “far-right” Marine Le Pen, with around 66% of the vote in the second round of the French elections on 7th of May, confirming prior polls insinuation in previous weeks. The general sentiment was full of optimism in Europe, as Macron’s victory has somehow reduced the risk of a Frexit, a real threat for investors across the globe following the unexpected Brexit referendum and Donald Trump’s victory in U.S. presidency last year.

But the reaction on the forex market was a bit different after the results. The single currency surprisingly started to lose height from a short-lived high of $1.1020 on Monday 8th of May to as low as $1.0838 on Thursday. The sell-off on the common currency was primarily attributed to the fact that markets had already priced in the expectation of Macron’s presidency for the past two weeks after the first round of voting on 23rd of April, and there was no good reason as such to drive the euro higher.

Secondly, in the aftermath of the results, attention was turned to the next potential French political risk with the two rounds of French legislative elections due on 11th and 18th of June, adding pressure on the euro.

The risk is now on whether or not French President Macron’s En Marche! Movement will be able to win a parliamentary majority in the forthcoming Assembly elections so as to implement the “promised economic reforms to restore France’s competitiveness”. As of now, it’s still unclear on how much support the newly formed minor party will achieve, given that most of its parliamentary candidates will have no prior political affiliations and will be up against highly experienced candidates from the Republican and Socialist Parties.

Nonetheless, the euro managed to bounce back and recoup some of its losses above $1.0900 late on Friday as the U.S. dollar witnessed some selling pressure, following the dismal consumer inflation and retail sales data in the United States, which reduced the expectation of a Fed rate hike later in June. The latest CME Group Fedwatch tool on Friday showed that the probability of a June rate hike by the Fed has now eased below 80% post U.S CPI figures.

On Wednesday 17th of May, Euro Zone inflation report will be closely watched, as another strong figures will likely fuel speculation that the European Central Bank could start winding down its massive asset buying scheme earlier than planned, regardless of ECB president Draghi's latest comments against it in his last conference.

Technical side: Long term outlook-EUR/USD- Setting an early stage for a bigger decline in the coming weeks!

The lost in momentum on the EUR/USD last week appeared more like an old market adage “buy the rumour, sell the fact”. Indeed, the market sold the news, and the euro nose-dived more than 170 pips to as low as $1.0838 on last Thursday, before trimming back some of its losses to $1.0930 on Friday.

Early in May, the hourly chart was suggesting for one last leg higher on the EUR/USD and it came a tad lower from our estimated target level at $1.1020 before the market turned bearish on the euro last week! 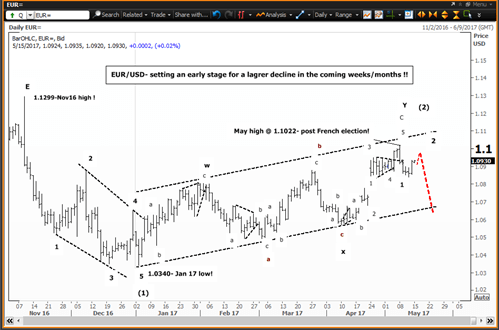 In the coming days, we foresee a possible setback to $1.0960(@61.8% fibo retracement) which would complete wave C of an expanded flat in Wave 2.

The immediate invalidation level for our proposed count stands at $1.1022(previous May high!) from where the upward momentum might explode to $1.1075/1.1100.