Over the past few months, the Fed has been hesitant on whether to raise rates this year, keeping investors across the markets on the edge of their seat. But on last Friday, the U.S dollar jumped strongly against the majors after U.S Federal Reserve Chairwoman Janet Yellen and Fed Vice Chairman Stanley Fischer have increased prospects of an eventual Fed rate hike action by the end of this year.

In a speech at the Fed's annual monetary policy conference in Jackson Hole, the U.S. state of Wyoming, Mrs. Yellen stated that the case for an increase in the Federal Funds rate has strengthened recently as the U.S economy is "now nearing" the Fed's statutory goals of maximum employment and price stability due to improvements in the labor market and to expectations for solid economic growth. However she gave markets little guidance on the timing of rates hike, saying they would be gradual and happen over time.

Yellen's comments was later echoed by Vice Chair Stanley Fischer in a media interview, where he said that the U.S economy had strengthened during the past three months, and that this Friday's U.S jobs report for August will likely be an important gauge of a rate hike in the near term.

EUR/USD bias remains to the downside in the coming months.

On the Fx market, over the last two months , the Single currency has been creeping higher to as high as $1.1340 last week, until hawkish comments from Yellen and Fischer on Friday which sent the euro into a tailspin to as low as $1.1159 on Monday.

In Elliott wave perspective, this sideways price action could possibly be a “Contracting Triangle formation" as indicated by the wave structure, and by the converging trend lines that connected the extremes of wave A and C, and B and D (shown in the diagram). 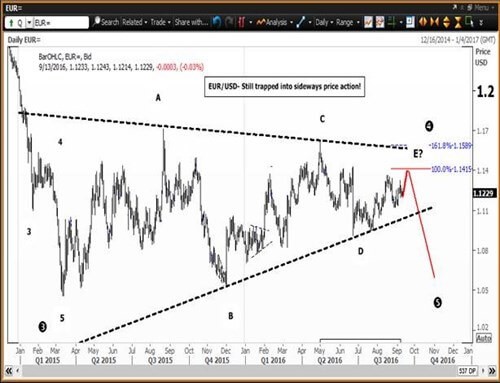 Based on the sharp decline in EUR/USD to $1.1159 on Monday, Wave E of that bearish triangle formation may have been completed at $1.1365 on 18th of August. And if the wave labeling on the triangle count is correct, a break of the trend line connecting wave B and D near $1.1030/50 would suggest that a thrust lower below previous low of $1.0457 posted in March 2015 would be on the cards in the coming months.

On the flip side, the immediate resistance in the currency pair is placed at $1.1365(Aug 18 high), above which at $1.1435(pre-Brexit high) could be tested. However, a move above $1.1711 would invalidate the bearish contracting triangle scenario.

Looking ahead, Friday’s US Non-Farm payrolls figures (1230 GMT) are going to be closely scrutinized by the markets, given the renewed focus upon the US labor market data as a gauge of a rate hike in the near term.